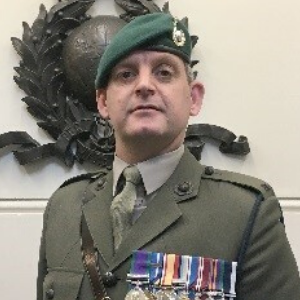 WO1 (RSM) Mason joined the Royal Marines in 1992 and has served in 3 Commando Brigade for the vast majority of his career. He has served operationally in Northern Ireland, Former Yugoslavia, Iraq and Afghanistan.  He was promoted to WO1 Regimental Sergeant Major of 43 Commando FP Gp RM in 2014 and conducted further RSM appointments at 40 Commando RM and HQ 3 Commando Bde RM before being awarded the prestigious role of the Corps Regimental Sergeant Major in April 2018.

“I am so humbled to support the Soldiering On Awards, which reveals the stories of many remarkable and amazing achievements from the entirety of the Armed Forces Community.”