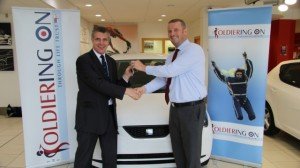 The winner of the Seat Mii S Car was drawn at the Soldiering on Through Life Charity reception at the House of Commons on Thursday 28th November.

Drawn by TV’s Anne Diamond, the lucky winner was Nigel Gates from Shaw, Nr Oldham, Greater Manchester, who had bought three raffle tickets on 26 October during a rail tour organized by the Branch Line Society.  BLS is a strong supporter of SOTLT and its members purchased over £500 of raffle tickets for this year’s raffle.

The car, which was provided for the Grand Raffle by an anonymous donor, and was supplied (at cost), by Currie Motors UK Ltd.

On the Wednesday December 4th Nigel travelled down to Currie Motors SEAT, Barnet whereby Vince Ellis, Sales Manager, along with the Charities Trustees Colin Debenham and Dennis Grimes, presented him with the keys to his new car.

Celebrating the handover, Nigel’s enjoyed a glass of champagne, supplied by Taittinger, another of SOTLT’s major sponsors.

At the ceremony Vince Ellis presented the Charity with a cheque for £500 from Currie Motors UK Ltd – by way of a separate donation to SOTLT.  The Trustees thanked Currie Motors for their ongoing assistance and generous support.
Photocredit –