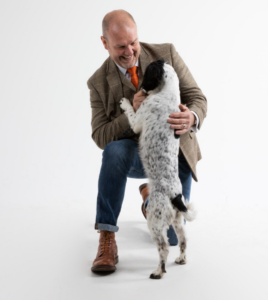 Dr Robert Hewings is an ex-police dog handler who also served in the Parachute regiment – so he’s ‘x-forces’ on two counts!

UK College of Scent Dogs specialises in the training and instruction of all aspects of canine scent-work, coaching a wide range of skilled animals and trainers from pet-dog handlers to detection service providers – just like the police dogs that sniff out drugs, and army dogs who are trained in bomb detection.

Rob completed his Doctorate in dog training with Sunderland University, and this life changing experience encouraged him to travel to America, where he worked closely with two canine charities: Warrier Canine Connection and Paws for Purple Hearts. 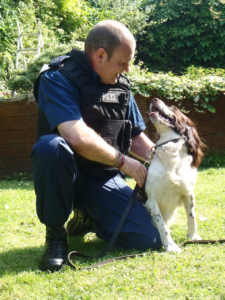 An introduction to Bravehound – 2019 Soldering On Award Winner

On returning to the UK, Rob attended a seminar where he met a client who introduced him to Bravehound – our 2019 Soldiering On Award – Animal Partnership Winner. Learning how this fantastic organisation trains companion dogs to support the veteran community, Rob spoke to the team about the American principles of training that he’d picked up on his travels. He shared with them the concepts he’d developed from education abroad – and this advice resulted in Bravehound expanding from a companion dog organisation to becoming the incredible assistance dog training charity it is today.

These dogs are simply amazing! Rob told us about working pets who are able to recognise nightmares and gently wake a veteran suffering from PTSD. Bravehound is now training dogs in accordance with the theories that Rob introduced, and teaching the dogs to recognise smells released through hormones such as cortisol and adrenaline. The support of a Bravehound dog can even prevent someone from self-medicating or drinking, and can give people the confidence to sleep.

Rob is an explosive search dog trainer and drugs search dog trainer, but he’s not the only member of the family with advanced canine skills. Rob’s wife Karen is also an explosive search dog handler with two decades of experience working for the Metropolitan Police. The pair teamed up to create the UK College of Scent Dogs, with Karen heading up the operational training for professionals such as security guards and civilian search dog handlers – like those we see busily working at airports.

Support from Pets at Home, our Animal Partnership Award Sponsor

Rob enjoys working with Bravehound to “give something back” and is a highly regarded resource for the charity.  So when Bravehound won their Soldiering On Award, it was Rob who represented the charity to collect the award on behalf of the proud team.

It was during this fabulous evening that he met our Animal Partner Award Sponsor, Pets at Home.

A visit to Pets at Home’s Support Office office gave Rob an insight into running an animal-focused business.

Rob explained that, “As Bravehound is a new charity, Pets at Home were really helpful! They provided assistance for social media, offering simple tips such as posting the right thing at the right time, reviewing our customers and understanding the times people are on line. The advice they offered can help us push publicity of Bravehound really high.

“A further meeting with their charity team on how to develop a charity included lots of suggestions – from dinner parties to seminars.”

Rob also made some fantastic friends there who may be able to speak at future scent seminars and further contribute their support for Bravehound.

“It was a pleasure to introduce Rob and the Bravehound team to Pets at Home. We put the pet first in everything we do – whilst also balancing the needs of running a successful business. Our expertise proved really useful to Bravehound. Winning the Soldiering On Award was the reason to open our doors and share our learnings with the team, whilst also giving Rob the opportunity to share his own insight and expertise in animal training and behaviour with us in return.”

You can watch a fabulous Pets at Home video that explains more about Bravehound’s work here on our Facebook page. 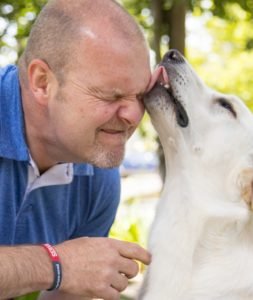 If you would like to know more about the UK College of Scent Dogs:

Nominations for the 2020 Soldiering On Awards are now closed, but will re-open next summer for 2021, so make a note in your diary.

X-Forces Enterprise provides support to businesses linked to the military community. If you know of a worthy organisation that could benefit from some extra guidance, please get in touch.