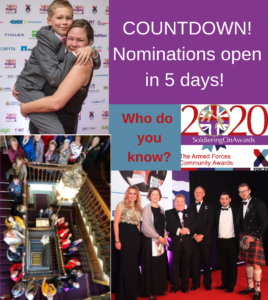 Only five days to go until nominations open for the 2020 Soldiering On Awards! Have you decided yet who you’re going to put in the spotlight?

You may have two or three people in mind – that’s fine! There’s no limit on the number of nominations you can make.

Today let’s catch up with our Family Values and People’s Choice Award Winners.

Our 2019 Joint Winners of the Family Values Award were The War Widows Association and Jamie Small.

Bereaved military spouses can gain support from others who understand exactly what they are going through. Founded in 1971, The War Widows Association represents widows and widowers irrespective of their late partner’s age, service or rank.  It provides national and regional events ensuring no military family is forgotten after the loss of their loved one.

Jamie’s Dad struggled to make the transition to civilian life when he left the Army after 21 years service, and he sadly took his own life. Ten-year-old Jamie and his mum, Mandy, were helped by military charity SSAFA, and decided they wanted to turn their grief into an amazing fundraising effort for the charity. Jamie is our youngest ever Finalist, and his strength and courage are an inspiration to all those he meets.

Mary Moreland, Chairman of The War Widows Association, told us, “Winning the Soldiering on Awards Family Values Category has been amazing, it is well deserved recognition for all the hard working volunteers of the War Widows’ Association. War Widows are often ignored and winning this award has put these individuals into the spotlight.”

Jamie’s mum Mandy Small told us, “Winning a Soldiering On award in the Family Values category has been amazing for Jamie, he’s so proud to have gotten recognition from the very people he wants to help. He’s had strangers say thank you and well done to him since winning and people’s awareness has grown because of what he’s done. Since the awards I’ve been given a chance to speak publicly about our story which is something I want to pursue. Winning the award has changed both our lives for the better and has ignited both our passions to do more in the future.”

This award was generously sponsored by NetApp. Nick Thurlow, NetApp’s Managing Director, said: “We are proud to sponsor the Soldiering On ‘Family Values’ Award and share in the celebration of those innovative individuals, families, and groups proactively committing to nurturing these core human values. Through their visionary and compassionate missions, they aim to restore and rehabilitate those values. They are the unsung heroes and we hope that our sponsorship will elevate the importance of compassion and human connection”.

Our 2019 People’s Choice Award Winner of was project Semaphore.

This Award was decided by a public vote.

Project Semaphore is a Royal Naval Association initiative aimed at tackling social isolation in older veterans. Funded by the Aged Veterans Fund, it provides iPads to its members, to help them keep in touch with family, find friendship and connect with the world, in turn helping improve mental health and reduce poverty.

Sarah Clewes of the Royal Naval Association has told us, “Winning a Soldiering on Award has attracted new Volunteers, and everyone involved in our Project has a renewed sense of pride and wants to share our success. We are reaching more beneficiaries as SoA has helped to raise the profile of the Royal Naval Association too… a brilliant outcome from winning a prestigious Award!

This award was generously sponsored by Thales. Steven Ramm, the Submarine Business Development Lead at Thales said, “It’s a piece of work that’s been lacking, because it’s looking at cross-charity activity and also it’s capturing elements of the Veteran community which was somewhat lost and largely forgotten.”

It will be fantastic if you can help to spread the word by sharing this blog to make sure as many people as possible have the opportunity to nominate whoever they feel deserves an Award!  These tags may help you: #SOA2019 #SOA2020 #soldieringonawards #warwidows #MANDYSSSAFABALL2020 @mandy4small @SSAFA@RNAHQ @BenOwen42