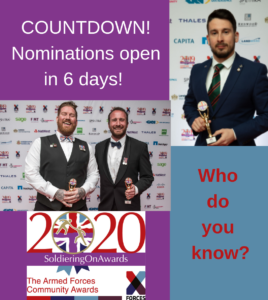 Only six days to go until nominations open for the 2020 Soldiering On Awards! Have you got your thinking cap on to decide who you’re going to nominate? As Nathan Cumberland asks, is there someone special that you would like to thank for what they’ve done?

Remember that it could even be you!

There are several Award categories, so you’re bound to know at least one person or group that deserves recognition.

Today let’s catch up with our Inspiration and Sporting Excellence Award Winners.

Our 2019 Winners of the Inspiration Award were Luke Sinnott and Nathan Cumberland.

Why Luke and Nathan deserved recognition…

Retired Captain of the Royal Engineers, Luke Sinnott, was injured in an IED explosion, which claimed both his legs and severely damaged his arms. He first represented his country in sport at the Invictus Games, and is now aiming for the 2020 Paralympics. He is also a trustee and pilot for Flying for Freedom, and intends to fly to the South Pole in two years’ time.

Luke has told us that, “On the night, it was a shock to win and I was still sitting long after they said my name as it hadn’t sunk in. It feels great to be recognised for the work I do on and off the track. I’ve not picked the easiest of journeys but the challenge and overwhelming odds against success is what makes it worthwhile when you succeed.”

And Nathan confirms: “Nominating someone is a great way to say thank you for what that person does. It shows you’re in awe of what they’ve been through, and how they’ve overcome adversity to be inspirational.  It’s a surreal moment when you find out you’ve won! For me, it was a great honour. So nominate someone to help elevate their story – what they’ve gone through to reach the other side and the fact that they’re still here.  Never give up – no one knows what’s around the corner!

This award was generously sponsored by NatWest. Owen Lawrence, Head of Operations for NatWest Business Banking said: “The Inspiration Award is an opportunity to salute those who achieve excellence but also to recognise the individuals, groups and communities that will be inspired to do great things by these actions.”

Our 2019 Winner of the Sporting Excellence Award was Craig Monaghan.

Craig lost ten men from his company during an Afghanistan tour, which left him with a traumatic brain injury and two perforated ear drums. Attempting suicide three times, he hit rock bottom. Sport helped him recover – first by representing the UK in the Warrior Games, then receiving international honours for England in the Deaf Rugby Team.  He has helped more than 120 veterans back in to sport with a programme he runs at Sale Sharks.

Craig feels it’s important to nominate as it “gives recognition to people who have grasped the cards they have been dealt and turned their lives into something positive.”

This Award was kindly sponsored by Spectra Group. CEO Simon Davies said: “Although I can only present the Sporting Excellence Award to one winner, it is without a doubt that all of this year’s finalists deserve our utmost respect and praise. We feel truly privileged to be able to hear their incredible stories and be a part of their celebrations.”

It will be fantastic if you can help to spread the word by sharing this blog to make sure as many people as possible have the opportunity to nominate whoever they feel deserves an Award!  These tags may help you: #SOA2019 #SOA2020 #soldieringonawards @helpforheroes @TheDMWS @cobseo @NatWestBusiness @WeAreInvictus @fly2pole @craig_monaghan @warriorgames @SaleSharksRugby @SharksForces