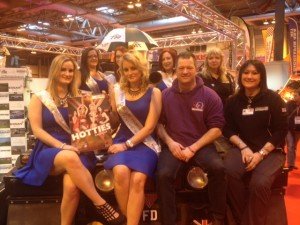 Five of our Hotties visited the Autosport International Motor Show at the NEC in Birmingham along with Soldiering On Chairman, Tal Lambert.

The girls had been invited to attend by Mission Motorsport for the second year running.

Eneshia reports: “We put on our blue dresses and set to fundraising.  We met some great people and came across quite a few people who remembered us from last year, which was nice.  We sold our last calendar at about 1:30 on Sunday to one of the cheeky lads from Mission Motorsport.  I believe over the weekend we raised somewhere around £1000.00.”

If you missed out on a 2015 calendar, watch this space for news about 2016 later this year!

We want to thank Eneshia and the Hotties Girls for all they do to support Soldiering On and Mission Motorsport.  It has been a pleasure to have them join us at a number of events throughout the year and we can’t wait to see what they have install for next years Hotties’ Calendar.  We are still receiving some final orders (there were 10 left as of 14 Jan); however, the total raised (split between Mission Motorsport and Soldiering On) is just under £3500.  – A fantastic result and well done to you all!

The Hotties will present the cheque to both Soldiering On and Mission Motorsport at the Union Jack Club on the day of the Soldiering On Awards (18 Apr 15).

We also hope that you will be able to join us again for the 2016 Hotties’ Calendar launch in September 2015 and we will advertise the date and location in due course!