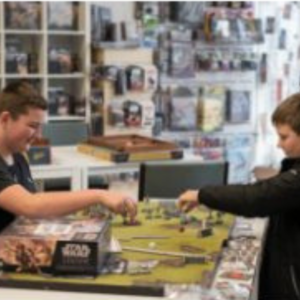 One of the issues we see regularly in the press is the problem with children and young people becoming addicted to online gaming. It has been proven that there’s a strong link between video game addiction and depression.

A recent report in the Telegraph stated that, “Psychiatrists have issued a warning over the link between depression and video game addiction, after MRI scans revealed for the first time the potential damage caused to young brains. The images showed the signals between the different parts of gaming addicts’ brains were disrupted, driving them to continue playing but also worsening their depression. The “emotional” part of the brain, responsible for the feelings of depression, was shown to be overriding the “executive” part of the brain that could rein in their addiction.” *

One Soldiering On Award Finalist is tackling this problem in a safe, community-orientated way.

Taylored Games is a games shop at the heart of its community in Kingsbridge, providing a fun, safe and engaging space for the local community to gather and play traditional table-top games like Monopoly, card games and role-playing experiences.

Run by husband and wife team, Adam and Rachel Taylor, the shop has a regular and loyal customer base, as well as being enjoyed by tourists to the town. The concept has been so successful they are seeking to begin a community interest company to provide this opportunity to schools so that the benefits of traditional gaming and teamwork can be experienced by a wider audience.

Adam Taylor understands the reasons behind some mental health issues, and explains how the shop’s services helps people to overcome them.

“I’m very aware of how gaming can help mental health in a way that online gaming doesn’t seem to be able to, because of the social aspect of it.  Games also improve memory and concentration and help people to relax with positive distractions.  One of our customers hadn’t left his house for two and a half years before we opened our shop yet is now coming in two or three times a week, having made a solid group of friends over games.

“Games help people relax, with the rules being fixed by the game rather than abstract social rules that not everyone necessarily understands; this means that they can bond with others over the game.  The huge variety of games now available means that no matter the temperament of the players there is always something available for them.

“Some games are fast-paced, some need lots of thought, some are co-operative – meaning that those who struggle in a competitive environment can still be involved.  The biggest thing that sets table-top gaming apart from online gaming is that table-top is much more social; you often hear of online friendships spanning the globe but this means that those friends do not have the chance to get together away from the game that brings them together.  When you start to include other aspects of gaming as well, such as model building and painting and role-playing games, these offer opportunities for players to do something that they wouldn’t otherwise be able to do.”

To find out more about this fun and engaging approach to socialising through games, see: www.tayloredgames.com

* Here’s the link to the Telegraph article.