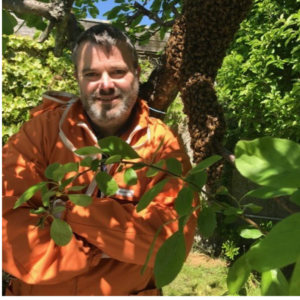 Sinah Common Honey is an award-winning business based in Hampshire – in fact, it won the 2019 Soldiering On Award Business of the Year Community Impact Award!  The company was set up by John Geden, a Veteran who had served in the British Army as a commissioned officer in the Cops of Royal Military Police before becoming Detective Chief Inspector for Hampshire Police. John took early retirement in December 2014 having been diagnosed with Post Traumatic Stress Disorder (PTSD,) something that in his own words “stalked him but hit him like an express train.”

For Mental Health Awareness Week, John has shared his thoughts on this vitally important issue, explaining how PTSD made him feel, and how X-Forces Enterprise (XFE)’s support helped him to establish his business despite suffering crises of confidence and other issues that he still struggles with.

“Having a diagnosis of PTSD did not really help me too much when I was trying to find the confidence to strike out alone and set-up my own business. I guess everyone who starts a business suffers raised levels of anxiety and, probably at times when things do not go well (and that happens regularly), a level of depression. But when you are plagued with these conditions as a normal state of life it kind of makes things a little more challenging!

“There are still bad times, even after four years of doing this. I still suffer from those classic PTSD symptoms of nightmares, flashbacks, anger, lack of confidence and sadness. There are still things that I struggle with; I am not very good with people and when you add ‘stupid’ to that mix I have very little tolerance. I still get anxious and I still have days when I just cannot do a thing – but, thankfully, they are becoming less frequent now. I get easily frustrated and struggle to manage more than a few things at once, I guess anyone with the same diagnosis will recognise these symptoms.

“The one key piece of support that I simply could not have done without was that given to me by XFE and Help For Heroes. It seemed that whenever I suffered a crisis of confidence there was someone with a sensible answer at the end of the phone; often an answer that was staring me in the face but I just could not see because I was too entwined in the business. My military career taught me the benefits and necessity of team working, but as a sole trader you have to look wider to find that team.

“Starting your own business is not for everyone and I recognise that it could all have collapsed around my feet on several occasions had I not managed to dig deep and find some hidden reserve of tenacity (or maybe pig-headedness!). XFE will help you consider your fledgling idea in forensic detail; the courses and seminars that they run will make you focus on the minutiae of detail and ask yourself difficult questions. The course will help you make most of your mistakes on paper before you start rather than in practice when you are in the early critical stages. The process reminded me of a phrase that was drummed into me at Sandhurst by my Colour Sergeant…  “Sir, time spent in reconnaissance is never wasted.””

XFE Founder and CEO Ren Kapur spoke proudly about John’s achievements: ‘’I had the privilege of co-facilitating the first programme we delivered that John had attended, and to see his confidence and business grow is such an inspiration to others. XFE is now supporting John to diversify his product range and through the success of his business he is also sharing that positive impact with others.’’

Sinah Common Honey is a honey producing business, supplying raw honey to local farmers’ markets, health food shops and food festivals. Keen to share the benefits of entrepreneurship which John experienced himself through the business, he introduced beekeeping as part of the Help for Heroes recovery programme and has donated his time, equipment and bees to make the course a success for other veterans. John is also about to launch a honey based cosmetic product, profits from which will be donated to Help for Heroes and other military charities. To find out more, see: www.sinahcommonhoney.com