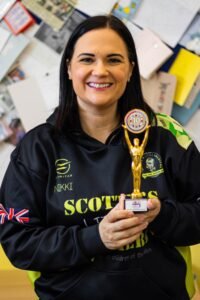 As we approach the new year, and start looking forward to our 2021 Soldiering On Awards nominations, we are continuing to support and promote the incredible work that our 2020 winners and finalists are doing within the community. SOA sponsor The Military Mutual spoke with 2020 Family Values Award Winner, Nikki Scott of Scotty’s Little Soldiers, to find out more about the charity, and what winning a Soldiering On Award means to them.

So what is Scotty’s Little Soldiers and why was it created?

Scotty’s Little Soldiers is a charity which aims to provide relief from the effects of bereavement to young people suffering the loss of a parent who served with the British Armed Forces. I set up the charity after my husband was killed whilst serving in Afghanistan and I saw the devastating impact on our children.

How many children has the charity helped and is it whole life support?

It’s Scotty’s 10th anniversary this year and during the past 10 years we have supported around 500 bereaved British Forces children and young people. From the moment a member signs up, we are here for them until they reach the age of 25. They become part of the Scotty family and benefit from a wide range of support. We have a dedicated Support team always on hand if they or their parent is struggling, and we can direct them to additional help where it is needed. Our members all receive presents at important times of year such as their birthday, Christmas, Remembrance, and anniversary of their parent’s death, and they are invited to events to remind them they aren’t alone. They also have the opportunity to go on a respite break with their family, which we find is just what is needed. In addition, we provide guidance and opportunities around education, vocational training and employment. So we have lots going on. What has Covid-19 meant to you and the charity?

Well it’s obviously really tough for everyone but we have been particularly concerned about our members who already face a number of challenges as a consequence of losing their parent, so it’s been really hard for them. There is a lot of heightened anxiety and Scotty’s has been delivering an increased level of emotional support to a large number of families who are struggling to cope with added pressures. We’ve obviously had to adapt the way we support our members and face-to-face gatherings have been swapped with virtual events. We’ve laid on a selection of virtual parties for the kids and virtual support groups for parents, which have been well received. We’ve also kept the kids engaged with competitions and treats such as a Friday night takeaway!

A lot of our members have suffered as a result of not being at school earlier in the year, particularly those who were due to take exams, so we’ve been working closely with them.

For us as a charity, it’s also been a tough year. Our beneficiaries need us more than ever, but with mass fundraising events cancelled, our income is under pressure, so it’s a challenging time all round.

Winning the Soldiering on Awards 2020 Family Values Award, what does this mean to you? Will it help?

We are so honoured to win this award. Bereaved Forces families often feel disconnected from the military after the loss of their loved one, so to receive recognition by winning a Soldiering on Award helps us feel part of the military community, which really means a lot. Read all about Nikki’s 2020 award win here. A big thank you to The Military Mutual for their continued support with the Soldiering On Awards. Visit Scotty’s Little Soldiers to find out more about the great work they’re doing.