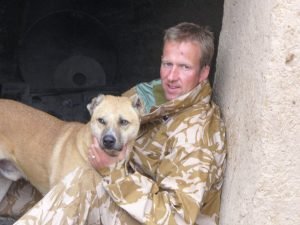 To recognise the incredible association between a member of the Armed Forces Community and their canine partner, highlighting how this partnership can help recovery after serious injury.

Pen Farthing and NOWZAD of Devon: Pen named this charity after the dog he adopted while on duty in the war-torn town in Afghanistan. The NOWZAD charity has reunited over 800 soldiers with the pets they adopted while serving in war zones around the world.