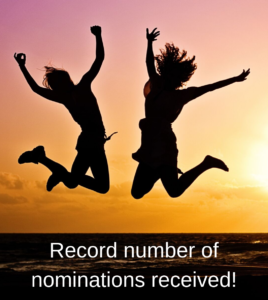 We are thrilled to let you know that this year, we’ve received a record number of Award nominations.

Over 200 people have told us about their heroes, the people that inspire or support them, the businesses that deserve recognition, the animal partners who bring richness to their lives – in fact, hundreds of nominees all equally deserving of praise!

So we’d like to say a HUGE THANK YOU to everyone who took the time to complete a nomination form. We really appreciate the way you’ve supported the Armed Forces Community.

Whether or not your nominee becomes a finalist, simply being put forward for an Award is a wonderful thing, so you’ve surely put a smile on someone’s face.

Judging will take place in two stages. The first round judges will begin scrutinising the nominations on Monday – this process will take a couple of weeks. Then the independent judging panel will begin their difficult task on October 28th, ensuring due diligence as the Finalists for each category are selected.

We’ll tell you more about the judges during the selection process. In the meantime, we can’t thank them enough for generously giving their time and effort for this amazing cause.

Wishing the best of luck to everyone who has been nominated in this, our tenth anniversary year!