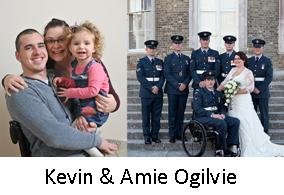 Kevin Ogilvie was just 22 when an explosion in Afghanistan in 2013 left him paralysed from the chest down, and Kevin and his wife Amie have been forced to adapt to a life with Kevin in a wheelchair.  But this feisty young couple have not only readjusted their priorities; they have spent the past year fundraising for the RAF Benevolent Fund (RAFBF), who supported Kevin after he was injured.

At the time of the accident, Kevin and Amie had a baby daughter, Grace, and a wedding booked for the following year.  This wedding became the couple’s focus as Kevin recovered.

Amie gave up her job to be close to Kevin while he was in the Oswestry Spinal Unit.  From the first moment, she spent every day supporting him, feeding him and keeping him entertained.  She overcame several home moves until the RAF Benevolent Fund stepped in with financial support to ensure Amie and Grace could stay with Kevin during his recovery.  The charity also paid for Kevin’s parents to visit every other week, providing the family additional support to help him through his recovery.

So, to say thank you, the family set their sights on fundraising for the RAFBF, as well as SSAFA, rallying friends and family together in their efforts.  Kevin’s brother Ali raised over £3,000 by bungee jumping twice in two days. A fantastic midsummer ball brought in almost £7,000 and supermarket bucket collections bumped up the figure to an incredible £20,000!

Amie attended meetings to gain the knowledge she needed to help Kevin in his recovery.  She became his rock, joining in his determination that the family continue to live a fulfilling and enjoyable life.

Nothing stops this family: Kevin, Amie and their ‘team’ are planning a sky dive for this year.  Wonder what’s next?!