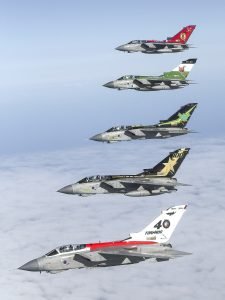 The Tornado Force was one of of 46 finalists honoured at the recent House of Lords reception. The evening was hosted by the charity’s patron, the Rt Hon Earl Howe PC, and celebrated individuals and organisations for their inspirational and outstanding achievements in support of the Armed Forces Community.

“The RAF Tornado Force was at the heart of the Cold War through the 1970s and 80s. Since Iraq’s invasion of Kuwait in August 1990, the Tornado Force has been on near continual combat operations around the world. Twenty-five years after first being sent to Iraq, the role of the Tornado has come full circle with its deployment in the fight against Islamic extremists. Despite terrible losses, countless deaths and injuries, in the face of overwhelming odds the men and women of the Tornado Force have displayed courage and determination whilst remaining at the heart of British combat operations.”