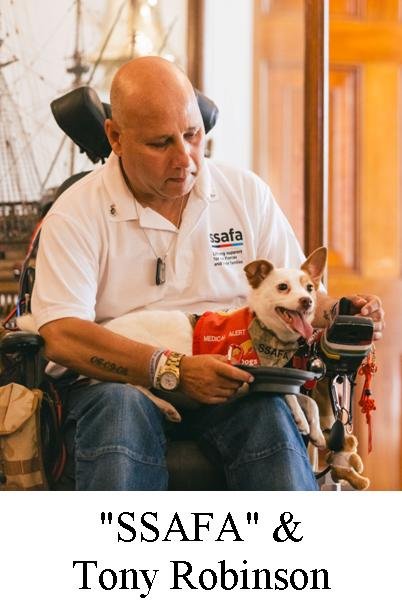 Tony Robinson, 56, suffered life-changing injuries in an accident in 2001.  Partially paralysed as a result of irreparable spinal and nerve damage, the former fitness fanatic, who had spent four years with 1st Battalion The Queen’s Regiment, was confined to a wheelchair. Yet his life improved dramatically with the arrival of SSAFA, a wonderful Jack Russell.

Frequent attacks of sudden, unbearable pain regularly placed Tony in hospital, taking him weeks to recover.  His whole family lived under terrible stress. SSAFA the dog was named in honour of the armed forces charity that had helped the family through hard times.

Determined to give something back, Tony and his wife Tina began fundraising for SSAFA to support their work with the Forces family – collecting £4000 each year.  Initially, they had simply wanted the dog to sit with Tony while fundraising, but SSAFA the puppy soon displayed a natural talent: she seemed to know when Tony was about to have an attack.

Tina contacted Medical Detection Dogs, a charity that trains dogs to help people with life-threatening health conditions. After successfully completing her training, SSAFA is now a registered Medical Alert Assistance Dog.  Not only can she predict the onset of an attack, she even knows where in the body it’s going to take place, allowing Tony time to take the correct medication before the pain kicks in.

Tony says, “SSAFA’s changed our lives; I don’t feel like a drain on the NHS any more.  She’s never got it wrong and I’ve only been hospitalised twice in the last three and a half years.”

Tina and their children, Scott and Nicole, can now lead normal lives instead of being afraid to leave Tony’s side.  SSAFA enables him to achieve so much more than he thought possible, with increased confidence and a cheery woof!