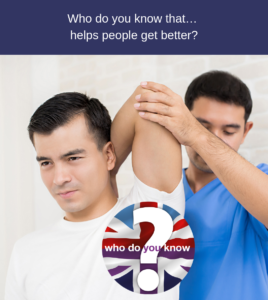 Many organisations and individuals work hard to improve the physical or mental health of the Armed Forces family.

Who do you know that might fall into this category?

This award honours a person or team that has demonstrated a major commitment and contribution in support of the physical or mental welfare of serving or former members of the armed forces community. This may be through healthcare, therapeutic treatment or rehabilitation services and support.

Our worthy 2019 winner is The Poppy Factory, founded almost 100 years ago to provide employment for veterans injured in the First World War. They were employed to make Remembrance products for the Royal British Legion and the Royal Family at the factory in Richmond-upon-Thames. Production continues there to this day, and the service now operates across the whole of England and Wales to help veterans source meaningful employment in the public, private and voluntary sectors.

Deirdre Mills, Chief Executive of The Poppy Factory, said: “We are honoured to hold a Soldiering On Award, which acknowledges the ongoing efforts of our employability team and the hundreds of men and women we support into work each year. With our help, veterans with health conditions can get back into meaningful and sustained employment in their communities.

“Demand for our expertise continues to rise, and the recognition brought by this award will support our efforts to help thousands more veterans fulfil their potential outside the Armed Forces.”

Since 2012, Dr Khan of the Harley Street Skin Clinic has quietly treated injured veterans for scars and burns, free of charge. His work became so in demand that he formed the Back on Track charity in 2014 to recruit more doctors. The clinic’s impressive clientele take on the fun challenge of a charity kart race against the veterans, which raises funds while helping the veterans regain their confidence.

Dr Khan said, “The award is amazing – it’s fantastic! We’re very humbled to have been nominated for it and it’s a real privilege to have won it. We’re not looking for accolade; we’re looking for the support to be able to help the soldiers and we believe that this award is going to bring more attention to what our soldiers need.”

Dr Richard Cullen told us on the night of the awards, “Part of it is just being here as a finalist; actually being called up onto the stage to get the trophy is just absolutely amazing… All of us, trustees, patrons, are just absolutely over the moon with the award!”

Other 2019 finalists in this category included:

Project Nova – Supporting veterans who have been arrested or are at risk of being arrested, Project Nova works in partnership with 15 Police Forces across the country. It has seriously reduced the re-offending rates and has been recognised by Magistrates and Judges who have told defendants that had they not been involved with the Project they would be facing a custodial sentence. It also supports the partners and children of those veterans who find themselves in the courts or police cells.