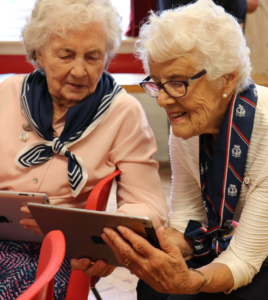 Sarah Clewes, the manager of Project Semaphore, Winner of our 2019 Soldiering On People’s Choice Award, is an inspiration to many.

If you haven’t yet heard of Project Semaphore, it is a fantastic Royal Naval Association initiative aimed at tackling social isolation in older Veterans. Funded by the Aged Veterans Fund, the Project provides iPads to its members to help them keep in touch with family, find friendship and connect with the world. This service helps to improve Veterans’ mental health and reduce poverty by placing them firmly in the midst of 21st century technology, ensuring their inclusion in this important form of communication that might otherwise have passed them by.

The Project has been hugely successful with over 700 iPads now being used by Veterans exploring the Internet for the first time. The organisation has engaged with over 50 organisations including care homes, associations and Armed Forces charities: some collective iPad training sessions in RNA Branches has created the added benefit of community spirit and social gatherings. 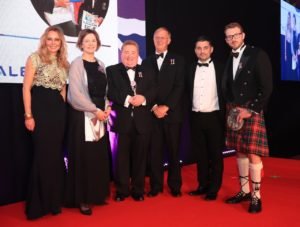 On winning the People’s Choice Award – which is decided by a public vote, Sarah Clewes said:

“We are delighted to have won; thank you so much to all those who voted for us. This Award is recognition for all those who have given their time to volunteer, stepped outside their comfort zone to learn how to use an iPad and for the range of like-minded organisations and Charities who have helped us reach more veterans.”

Sarah’s advice for a successful project

Sarah strongly promotes the idea of collaborative working. As a Veteran herself, having served in the Royal Navy for over 20 years, she loves to engage with fellow Veterans. By exploring various avenues to enhance what other organisations were already offering, she saw the benefit in working with like-minded people whose aims aligned with her own.  Sarah also prides herself on always being loyal and professional. To achieve the project’s success she’s been happy to ask tough questions, and she strives to inspire others.

“Wouldn’t the world be a better place if we all tried to effect positive change?” 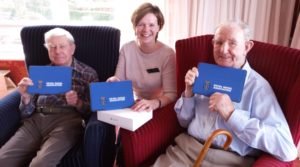 Sarah has told us how winning the Award has helped to reach more of the Project’s target audience: “Winning a Soldiering on Award has attracted new Volunteers, every one involved in our Project has a renewed sense of pride and wants to share our success. We are reaching more beneficiaries as SoA has helped to raise the profile of the Royal Naval Association too… a brilliant outcome from winning a prestigious Award!”

As a Soldiering On Award Winner, Project Semaphore is benefiting from the fantastic tailored 3:6:12 support package from X-Forces Enterprise. She is also now able to explore the opportunity for a new Trustee role as a result of connecting with an inspirational leader at the SOA awards.

This kind of networking opportunity is hugely important to Sarah, both for her own professional development and to spread the word regarding the success of Project Semaphore. As she says, “It would be easy to replicate – and exploring the Internet, being online and IT savvy really does change lives.”

To find out more…

You can also read some interesting case studies here.

Nominations for the 2020 Soldiering On Awards are now closed, but will re-open next summer for 2021, so make a note in your diary.

X-Forces Enterprise provides support to businesses linked to the military community. If you know of a worthy organisation that could benefit from some extra guidance, please get in touch.