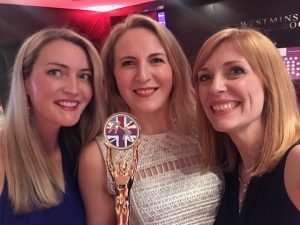 Rosie Phelps-Goggin and her sister Catherine Dodd became aware of the Soldiering On Awards  through X-Forces Enterprise (XFE).  Their business, Doddl, provides clever cutlery for children that is approved by child development experts and helps babies and young children to enjoy eating independently.

Rosie said, “X-Forces supported our business from an early stage, by helping us to secure affordable finance via the Start-Up Loans Company and they continue to provide invaluable advice and guidance to our business.”

Rosie, Catherine and their business partner Laura Thomas (sales and development director), who joined the business in January 2017, have had an amazing experience throughout the 2018 Awards process. “For us, the Soldiering On Awards raised our profile, from the initial Finalists’ Reception at the House of Lords through to the Awards night itself. The publicity and PR that Doddl is still receiving since the Awards is spectacular because of the high-profile nature of the Soldiering On Awards. Most recently we were interviewed on Jeremy Vine’s BBC Radio 2 show and we have featured as the lead case study in a double page spread in The Times!”

“It was a complete honour to be announced as a finalist for the Business of the Year Award in the Start-Up category. And, with such stiff competition from our fellow finalists: Combat Pest Control and True-Tech Training, we never imagined that we would actually win! When Doddl was announced as the winner, I remember we were all completely stunned and couldn’t believe it! It was a tremendous feeling to win the award and to receive recognition for what we have achieved with Doddl; from starting a manufacturing company from scratch and building it to become the UK’s leading baby-led weaning cutlery brand in less than 2 years from launch.”

To find out more about Doddl visit: