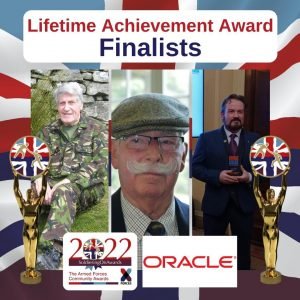 This award honours a person whose lifetime of dedicated service has provided a significant contribution in support of the Armed Forces Community.

All of the Soldiering On Award Finalists you’ve met in recent blogs and videos have achieved remarkable things and inspired countless people. However, as we navigate our way through life, we may be lucky enough to encounter that rare person who dedicates their whole life to the service of their country, and to other people who have served.

A fine example is the late His Royal Highness Prince Philip, Duke of Edinburgh. He served his country in a military capacity with distinction during the Second World War, and continued to serve the people as a respected and admired member of the Royal family in many ways, right up until his passing earlier this year at the age of 99.

Prince Philip’s qualities of stoicism, enthusiasm and determination – along with his charm, humour and warmth, can be seen in this year’s three LifetimeAchievement finalists. The exceptional men in this category have all gone above and beyond. They have dedicated their whole lives to the military family, supporting countless veterans, serving personnel, charity workers and others, whilst honouring those that have fallen in order to protect our country and freedom.

This award is generously sponsored by Oracle.

“Three incredible finalists have been shortlisted for this Lifetime Achievement Award. It is humbling to read about their achievements, how much they have given to their country both through service and beyond. All three are examples to so many of what service and selflessness actually mean. Oracle are delighted to be sponsoring this award and extend our congratulations to all three finalists and all the other worthy nominations in this category. We all need to be eternally grateful to them.”

“We are delighted to have the world’s largest database management company, Oracle, sponsoring the Lifetime Achievement Award. It is fitting that an organisation with such a long history of dedication to its community, employees, customers, and partners is associated with an award that honours remarkable individuals who have devoted their entire lives to service of both country and comrades.” 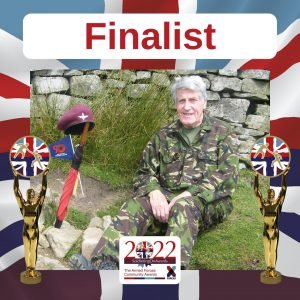 Jeffrey served in The Paras for seven years but had to leave the Army due to a back injury. Proud of his Service Record, he wears full combat gear for all his fundraising activities – which, to date, have raised over £300,000 for Forces charities.

“Jeffrey has exceptional strength of character, perseverance, tolerance and, above all, humility; he is dedicated to the pursuit of excellence. He has been honoured with an MBE and an award from RBL in recognition of his outstanding services to charity.”

In March 2021, aged 89 and challenged by cancer and his long-term back injury, Jeffrey set out on a 190-mile charity walk in celebration of 100 years of The Royal British Legion and 90 years for Support Our Paras. His walking exploits are legendary and a testament to his sporting prowess – none more so than his 650-mile walk from London to Switzerland, aged 75. His other triumphs include a 12km Assault Course, a 127-mile walk from Liverpool to Leeds and 100 miles in 10 days between 10 RAF stations.  His services were recognised in a letter from the Prime Minister, and in 2018, he won the prestigious Times Sternbeck award.

During the lockdown, Jeffrey walked 2.6 miles a day for 10 consecutive days for the London Marathon Challenge, plus hundreds of miles for The Lifeboats and RAF Benevolent Fund.

“A truly legendary character with a lively disposition, compassion and a wicked sense of humour, Jeffrey is a wonderful ambassador for the promotion of sporting involvement at all ages.” 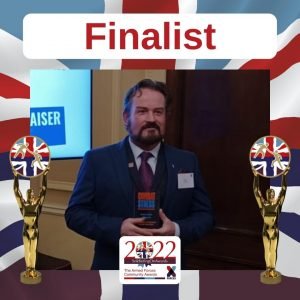 Sip Powers recently retired as a Major from the Armed Forces after 34 years’ of service. Alongside a distinguished career, during which he suffered his own significant health issues, Sip dedicated much of his spare time to support wounded, injured and sick (WIS) service personnel.

“Sip achieved Enduro7 with sheer determination and willpower, knowing that he would be raising the profile of mental health issues faced by veterans suffering in silence.”

Sip has now created his own business, ‘EXtreme Outdoors,’ enabling WIS personnel and veterans to access the great outdoors to assist with mentoring, coaching and wellbeing development.

“Through the numerous gruelling endurance charity events he’s instigated and participated in, Sip has raised awareness and generated more than £40k for military charities.” 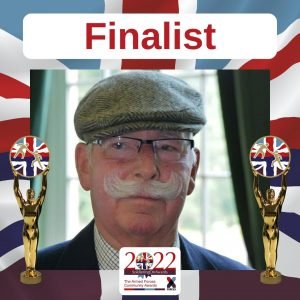 Jim Griffiths formed the Paderborn Branch of the Royal British Legion in Germany, serving as the Branch Chairman for 28 years. Although he has stepped down from that post, Jim continues his work volunteering as the Poppy Appeal Organiser and Community Support Chairman, posts that he has held for 36 years.

Jim served on the District of Germany Committee for 25 years and has mentored 16 Royal British Legion branches. At the age of 86, he still actively supports the charity and its aims of welfare, remembrance, fundraising and comradeship, never letting his disabilities deter him from his goals. Innovative Jim has provided activities for the Forces community, including bingo, car boot sales and fun runs, in order to raise money for the Poppy Appeal.

“Jim has been the driving force in raising over 1,000,000 Euros with an estimated average of 30,000 Euros per year, and was awarded the MBE in 1995 for his services to the Armed Forces Community.”

Jim has been instrumental in developing Anglo-German relations between British and German Veterans and engaging with the Armed Forces Community in Paderborn Garrison. He set up welfare clinics at the branch premises, providing a service for people to talk to a caseworker in confidence. During his long voluntary career, Jim has dealt with around 300 welfare cases and supported a community of 3500 soldiers, 1000 families plus a vast number of Veterans and their families.

“Jim sets a shining example to his peers and those that strive to follow in his footsteps. His lifetime commitment to supporting the Armed Forces Community makes him a superb role model.”