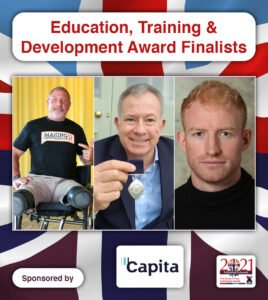 This award honours excellence in the provision of vocational education, training or skills development. This may be preparatory, ongoing or transitional development for members of the wider Armed Forces community, and it can be delivered by an individual, team or organisation.

The Award is generously sponsored by Capita, a global consulting, digital services and software business. The firm helps millions of people by delivering innovative solutions to transform and simplify the connections between businesses and customers, governments and citizens. It partners with clients to provide the insight and cutting-edge technologies that give time back, allowing them to focus on what they do best and making people’s lives easier and simpler. You can find out more about Capita here.

“Capita is delighted to support the Soldiering On Awards, which recognise the incredible achievements of those who have served our country and the diverse people and teams that collaborate to support our Armed Forces community. We’re especially thrilled to sponsor the Education, Training and Development award, which celebrates the outstanding Armed Forces individuals providing support for career transition, vocational education and skills development. We enable the education, training and development of thousands of military personnel and civilians across the UK, and we couldn’t be more inspired or impressed by our finalists.”

Jon Bentley is the Ambassador for this category; you can read about his support for the Soldiering On Awards here.

The Finalists for the Education, Training and Development Award are: 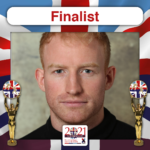 Following medical discharge after serving seven years with the Royal Marines Commandos and UK Special Forces in Afghanistan, Tom Leigh turned to a new career as an actor. Joining The Soldiers’ Arts Academy (SAA), he performed on stage and in film.

In the face of a global pandemic where most of the performing arts industry had ground to a halt, Tom stepped up to organise the SAA online arts workshops, enabling the academy to provide more than 350 free workshops to the Armed Forces community all over the world. These sessions offer arts training and creative opportunities and, as a result, some members have even launched artistic careers, selling artwork online!

Tom was instrumental in organising Army @ The Fringe, in place of appearing at the Edinburgh festival, allowing access to this fantastic opportunity for artists connected with the military.

Running the whole programme has provided huge mental health benefits.  At a time when many felt more isolated than ever, the classes, workshops and rehearsals have allowed a community to continue.

“Tom has programmed an ongoing series of over 350 workshops, as well as delivering them via online platforms, setting up and monitoring each individual one. Many have said it has helped to give a focus, create goals, and take their mind away from their struggles.”

Tom has redesigned the publicity for the SAA’s workshops and overhauled its online presence. This has helped to expand their reach and provide more of the military family with access to the creative arts.

“By running the online program, Tom has created access to free arts sessions for veterans and serving personnel all over the world; including LA, Ukraine, New York and South Africa. Without Tom, the SAA would not have been able to reach and help anywhere near the number of veterans and serving personnel that we have this last year. We are so grateful for this level of enthusiasm and commitment.” 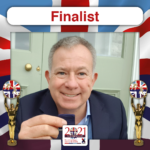 An outstanding and exemplary leader and philanthropist, Neil Jurd held the position of Commandant of Lancashire Army Cadet Force (ACF) until August 2019. Under his leadership, the organisation flourished as he increased cadet numbers, improved staff morale and fostered a relaxed, respectful atmosphere of cooperation, enthusiasm and fun.

Neil arranged annual cadet trips to London and abroad, activities that have embedded the culture of adventure and aspiration which allows these young people to flourish, and bestows on them a global perspective. In 2018, Lancashire ACF was proud to be awarded the prize for best British Military team on the 100 mile Nijmegen Marches.

Neil’s ‘Friends Of Lancashire Army Cadets’ charity initiative has raised over £20,000 to fund trips and purchase equipment for economically disadvantaged cadets, ensuring that the adventure of the army cadets is accessible to all.

“Neil helped hundreds of young adults on their way to becoming confident, independent members of society through creating exciting opportunities that encouraged their talents.”

His spirit of philanthropy also raised more than £70,000 for the Royal British Legion during his time as Commandant. In addition, Neil runs the Michelle Jurd Memorial Trust in honour of his late wife, successfully raising thousands for service charities, local schools and the personal growth of young people locally.

With Neil as Commandant, Lancashire ACF was named the highest graded county in the UK according to Regional Command. In his new role as Director of Initial Officer Training, Neil delivers global leadership training, developing the future officers of the ACF – where feedback has been consistently excellent!

“Neil makes an impact on everyone who meets him with his enthusiasm, passion, charisma and intelligence. Continuing to influence, inspire, lead and encourage others, his outstanding leadership skills have enabled him to get the very best versions of themselves from these cadets, dispatching them into wider society as confident potential future leaders.” 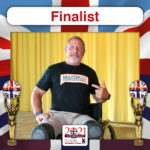 Making Generation R (MGR) is a unique programme that improves confidence and independence for veterans, and provides transferable skills that broaden their career horizons with a new-found ability to deliver public speaking and presentations.

Blesma, The Limbless Veterans’ charity, recognised that many of its members were weighed down by the psychological impact of their injuries as well as the physical restrictions. So, in 2015, it joined forces with the Drive Project, a creative social enterprise, to launch the innovative MGR pilot scheme.

The scheme trains Blesma members to develop their stories of triumphing over trauma into powerful motivational tools to help others. Employing theatre experts and storytellers, it helps members transform their stories into inspiring ‘performances’ that form the basis of follow-on discussions and workshops. The bespoke training programme encourages them to rationalise the dark and difficult incidents that changed their lives and use those stories to engage an audience, giving them the courage to face their own uncertainties and struggles.

“The personal aspect of seeing and hearing a military veteran talking about their life positively is hugely empowering.”

MGR has won widespread approval in the education sector with Blesma members regularly delivering resilience-building sessions to schools, hospitals and sports teams; the programme has reached more than 70,000 students and thousands of emergency services staff.

MGR successfully pivoted from face-to-face delivery to online sessions throughout the pandemic. With rapid flexibility from members, they made sure their efforts reached as many people as possible during lockdown, with 41,000 digital resilience packages being sent out and hundreds of people attending webinars.

“Re-establishing self-worth and finding new career prospects is core to the programme, which is constantly examined and refined to achieve the best outcomes. One of the greatest joys of the programme is seeing a veteran blossom with their new skills and then see the impact that has on students and first responders.”