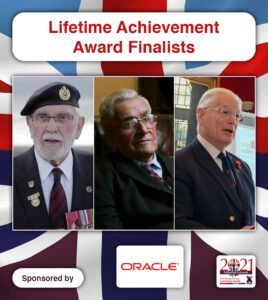 This award honours a person whose lifetime of dedicated service has provided a significant contribution in support of the Armed Forces Community.

All of the Soldiering On Award Finalists you’ve met in recent blogs and videos have achieved remarkable things and inspired countless people. However, as we navigate our way through life, we may be lucky enough to encounter that rare person who dedicates their whole life to the service of their country, and to other people who have served.

A fine example is the late His Royal Highness Prince Philip, Duke of Edinburgh. He served his country in a military capacity with distinction during the Second World War, and continued to serve the people as a respected and admired member of the Royal family in many ways, right up until his passing earlier this year at the age of 99.

Prince Philip’s qualities of stoicism, enthusiasm and determination – along with his charm, humour and warmth, can be seen in this year’s three LifetimeAchievement finalists. The exceptional men in this category have all gone above and beyond. They have dedicated their whole lives to the military family, supporting countless veterans, serving personnel, charity workers and others, whilst honouring those that have fallen in order to protect our country and freedom.

This award is generously sponsored by Oracle.

“Three incredible finalists have been shortlisted for this Lifetime Achievement Award. It is humbling to read about their achievements, how much they have given to their country both through service and beyond. All three are examples to so many of what service and selflessness actually mean. Oracle are delighted to be sponsoring this award and extend our congratulations to all three finalists and all the other worthy nominations in this category. We all need to be eternally grateful to them.”

“We are delighted to have the world’s largest database management company, Oracle, sponsoring the Lifetime Achievement Award. It is fitting that an organisation with such a long history of dedication to its community, employees, customers, and partners is associated with an award that honours remarkable individuals who have devoted their entire lives to service of both country and comrades.”

The Finalists for the Lifetime Achievement Award are: 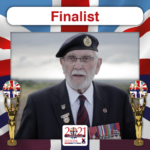 Throughout his life, George maintained the ambition to build a worthy memorial in France to commemorate those that died on D-Day and in the subsequent Normandy Campaign. Seventy-seven years after the battle, his dream was realised when the British Normandy Memorial officially opened on 6th June 2021 – an achievement borne of George’s determined campaigning, fundraising, media engagement and his unwavering dedication to the remembrance of the 22,442 servicemen and women who sacrificed their lives for our freedom.

“In 2016, George’s service to veterans was recognised with an MBE by the Queen, an honour that proudly sits alongside his Legion d’honneur awarded by the French government.”

George has demonstrated unwavering commitment to the Normandy veteran community. He delivers countless conferences, talks and presentations, inspiring young people and bringing to life the reality of war and the lessons that must be learned.

“As George said: ‘After the conflicts, many friends and colleagues were left behind on the beaches, the fields and in jungles. These are the real heroes, and we must and will always remember them.’” 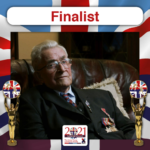 Aged 101, few people have dedicated as many years to serving our military as Martin Frank ‘Bill’ Sykes. During a 30 year career in the RAF, and subsequent 53 years as a volunteer for multiple military charities, Frank has always put service first.

Frank fought for our country in North Africa, Italy, Libya, the Suez Canal Zone and Cyprus, remaining in the RAF until he retired as a Senior NCO Aircraft Fitter in 1968. He began volunteering even before retirement – working evenings, weekends and any spare hours he could find to help serving personnel and veterans who needed support.

Frank has volunteered for the War Pension Committee – for which he received a British Empire Medal, RAFBF, RAF & Dependants Disabled Holiday Trust and Royal British Legion. He has taken on a variety of roles including trustee, chairperson, treasurer, welfare officer and caseworker. Frank volunteered for and is an honourary life member of SSAFA, still continuing to raise the charity’s profile through marketing and publicity. He advertises SSAFA on his car to strike up conversation with veterans, saying, “Wherever I go, SSAFA goes!”

“Frank has supported hundreds of people, either through his casework roles, or via the teams he managed when he took on leadership roles within Forces charities. He has mentored many volunteers who were inspired by his compassion and ability to create a sustainable impact on the community.”

Frank was a fountain of knowledge, supporting in a variety of ways from securing pensions, living and disability allowance, and helping with housing and benefits, to obtaining funding for home modifications and wheelchairs for disabled veterans. Alongside the cases, admin and management, Frank also acted as a befriender in many of his roles, and visited bereaved families, isolated veterans and clients in hospital.

“Frank has championed so many people in the Armed Forces. He truly recognises what each person who has served has given to our country, and he never takes that for granted.” 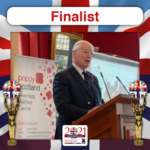 Lieutenant General Sir Alistair Irwin KCB CBE is an outstanding leader and champion of the Armed Forces community, both in Scotland and beyond. He guided the Army through a period of significant change, overseeing the amalgamation of the Scottish regiments, and has helped numerous charities navigate through immensely challenging periods.

Since retiring from service in 2005, he has devoted his life to the betterment of the Armed Forces community and the memory of the fallen as a senior office bearer at a wide range of organisations. These have included President of Veterans Scotland, Vice-Chairman of the Commonwealth War Graves Commission, Vice-President of the Royal Caledonian Education Trust and Chairman of Trustees of The Black Watch Regimental and Museum Trusts.

Since 2006, Sir Alistair has also served tirelessly as President of Poppyscotland, Royal British Legion Scotland and the Officers Association Scotland. He has set the standard for collaboration between veterans’ organisations, not just in Scotland but across the UK.

“Sir Alistair operates effectively at the highest level but also remains a solider at heart. He is equally adept at building relationships with members of the Royal household as he is with galvanising volunteers. He takes greatest pride in collecting on his local high street for the annual Scottish Poppy Appeal, where he has personally raised many thousands of pounds over the years.”

Sir Alistair is the embodiment of the Royal British Legion Scotland’s motto “Service Not Self.” He has delivered many annual commemorative and comradeship events and, as Chairman of The Black Watch Trusts, he headed a fundraising appeal that raised £3.6m to develop its museum in Perth.

“Sir Alistair has been, and continues to be, an outstanding figurehead and role model for veterans and their families in Scotland.”