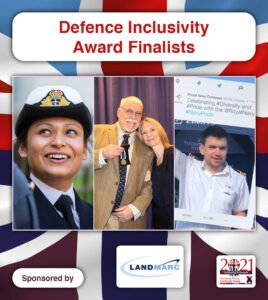 This award honours the commitment and achievements of an individual, team or organisation in delivering greater diversity and inclusion within UK defence and the Armed Forces community.

Once again, this award is generously sponsored by Landmarc. Originally created in 2003 to provide facilities management and support services to the Ministry of Defence, Landmarc has grown to deliver insightful, innovative consultancy and practical services that help to deliver military and civil protection training across the world.

“As proud sponsor of the Defence Inclusivity category, this is an exciting time for us as we learn all about this year’s incredible finalists. Each of our finalists has been hugely successful in achieving greater diversity and inclusion throughout the Armed Forces Community and we congratulate them all.”

Since the launch of the MOD’s Diversity and Inclusion Strategy in 2018, Soldiering On Awards has been shining a light on those that are proactively making things happen. This category in particular gives everyone in the Armed Forces community the opportunity to celebrate some fantastic stories, and shows how changes are happening to shape a positive, diverse and inclusive future.

Antony Cotton is the Ambassador for this category; you can read about his support for the Soldiering On Awards here.

The Finalists for the Defence Inclusivity Award are: 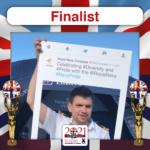 The Compass Network works to improve the lived experiences of LGBT+ sailors and marines. It supports people of all sexual orientations and gender identities across the Royal Navy, Royal Marines, Maritime Reserve and Royal Fleet Auxiliary, and its message is clear: LGBT+ people can thrive in the Royal Navy!

For the past 16 years, Compass has been at the forefront of diversity and inclusion within the military. It organised the first MOD diversity conference and developed the Armed Forces’ first transition at work and non-binary policies. It was the world’s first military organisation to march at Pride, and its annual events include conferences, themed events and LGBT+ awareness days – all leading to a greater understanding of LGBT+ people’s experiences.

The network is run by volunteers who undertake the work with a real passion for improving the lives of their peers. A committee delivers individual support, community engagement and education, and works with partners across the Defence, maritime and public sectors to share best practice. The network also supports cross-government efforts and British Embassy foreign missions around the world.

This collaborative approach has progressively led to a complete change in culture within the Royal Navy, to one which now embraces and empowers difference.

“The Royal Navy has been named as a top 15 employer for LGBT+ people and twice won the Pink News Public Sector award.”

With over a thousand members and more than 7,000 social media followers, the network’s achievements through education, mentorship, community and defence engagement have been phenomenal.

“Without the network, I couldn’t be who I am, couldn’t perform my best and would have likely left the Service had the network not changed the culture. The message given is clear: you can not only be LGBT+ in the Royal Navy, you can thrive – and we are proud to protect all of our diverse communities.” 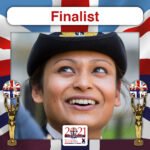 The Defence Hindu Network (DHN) addresses the needs of Hindus in Defence, as well as within the wider community. It influences the way in which the Army engages with BAME communities by highlighting that each of these groups has different needs and provides appropriate levels of pastoral support to members.

The network’s wide-ranging support includes bolstering chaplaincy support to help members through lockdown and helping LGBTQ+ networks to address the challenges of recruitment for transgender people. It supports members facing challenges in their careers, with an allocated officer to assist and provide independent, objective support throughout these stressful periods.

The network’s evidence-based method of approaching different age groups of Hindus has been key to allowing the team to shape the way that the Armed Forces engages with Hindu communities. By understanding what their knowledge gaps are and where their concerns lie, these have been addressed through engagement and educational events. As an example, the network recently delivered an Armed Forces Career fair to 1000 students.

“The DHN is proud of its coaching and mentoring programme, engaging extensively with Hindu faith schools, including debates, focus groups and forums to gather information and influence opinions within the community.”

On an even wider scale, the DHN formed the Defence Faith Networks Forum (DFNF) from six world faith networks, bringing together their shared views and delivering an agreed list of priorities to work in a mutually beneficial manner. This approach has been hailed as best practice which the MOD is planning to replicate through a greater use of similar forums.

“The network is passionate about addressing why there is under-representation in the Armed Forces from a community that is genuinely supportive of our troops.” 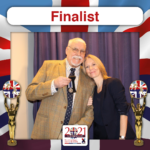 Emma Norton founded the Centre for Military Justice (CMJ) to provide legal services to current and former members of the Armed Forces who have suffered violence, harassment or abuse, plus bereaved families. Her challenging work has a strong focus on the welfare of serving and veteran personnel from minority groups.

In 2019, Emma took up the case of a Falklands veteran who had been court-martialled in the 1980’s for being homosexual. His medals had been taken away and good conduct badges removed from his uniform. Emma negotiated with the MoD for them to be returned to him by the Secretary of State for Defence, and he now wears them with pride.

Emma realised that hundreds of veterans had been similarly treated. In the 21 years since the ban on the open service of LGBT+ personnel was lifted, LGBT+ serving personnel are welcomed in every area of the Armed Forces. Emma has upheld the covenant for hundreds of veterans affected by this positive change. Her hard work encouraged the MoD to return medals to hundreds of people who had lived under the shadow of being dismissed in disgrace.

“Emma’s work has been a catalyst of remarkable change. She has helped develop understanding of the visceral hurt inflicted upon LGBT+ veterans and the enduring impact that the ban has had upon their lives.”

Emma’s work has helped LGBT+ military charity Fighting With Pride on its journey to seek reparations for those affected. This enables the protections of the Armed Forces Covenant to reach and welcome LGBT+ veterans back to the Armed Forces family.

“Emma’s work has brought hope to the community and helped Fighting with Pride on our journey to seek reparations for those affected. We feel Emma deserves recognition for being the catalyst of change.”