See the highlights video from the 2018 Soldiering On Awards, in the presence of Awards Patron the Rt Hon Earl Howe PC.

Join us once again in congratulating all of our amazing Awards Winners.

Our thanks go to Jeremy Vine and Vicki Michelle MBE for being such fabulous hosts for the evening, and to Carly Paoli for her outstanding performance and special tribute to RAF 100.

Click here to see the Soldiering On Awards 2018 Highlights video:

Scroll below to see each award winner’s personal presentation video, with thanks to all of our sponsors for enabling us to recognise so many remarkable people.

In recognition of a person, family or group whose selfless commitment, dedication and support for others in ensuring that they are cared for is a shining example of Family Values 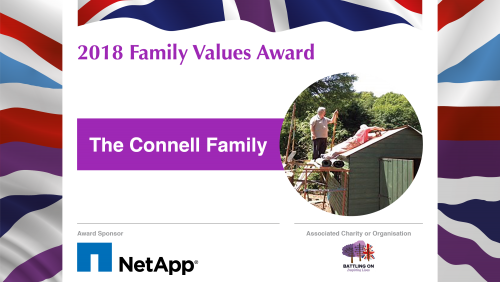 Tony and Liz Connell live at Merryhue Farm in Cornwall – a beautiful 124-acre registered Care Farm. Along with Tony’s brother Richard, the family has generously given free access to their farm, land and buildings to Battling On CIC, a multi-award-winning organisation that helps veterans and disadvantaged young people. In this unique environment, the whole family offers advice, empathy and practical help to people who are often overlooked by society. 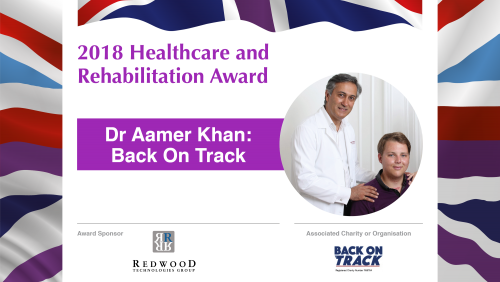 Since 2012, Dr Khan of the Harley Street Skin Clinic has quietly treated injured veterans for scars and burns – free of charge. His work became so in demand that he formed the Back on Track charity in 2014 to recruit more doctors. The clinic’s impressive clientele take on the fun challenge of a charity kart race against the veterans, which raises funds while helping the veterans regain their confidence. 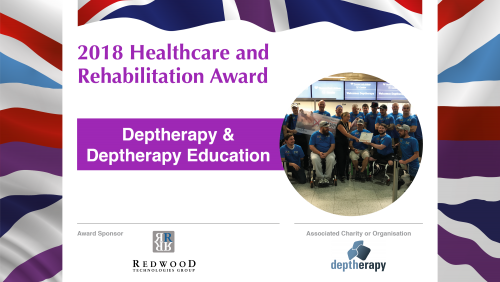 Deptherapy & Deptherapy Education rehabilitates Armed Services’ veterans who have suffered life-changing mental or physical injuries or illnesses. Through specially designed scuba diving programmes and its world-leading adaptive teaching, the aim is to qualify programme members as PADI divers. All instructors, plus the support team, are trained in Mental Health First Aid. The charity runs a highly effective Buddy Peer Support programme and offers 24/7 support to its members. 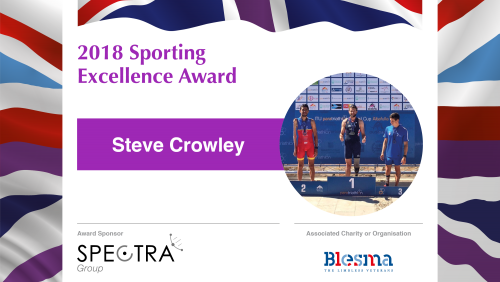 Former Welsh Guardsman Steve Crowley lost a leg in an IED explosion in Iraq in 2010. Running became his rehabilitation and he set himself goals to help his recovery – from a 10k race, through Marathons, to joining the GB Triathlon team. He has won many gold and silver medals, including from the World Triathlon Championships. His next goal is to represent the UK at the Paralympic Games in Tokyo 2020. 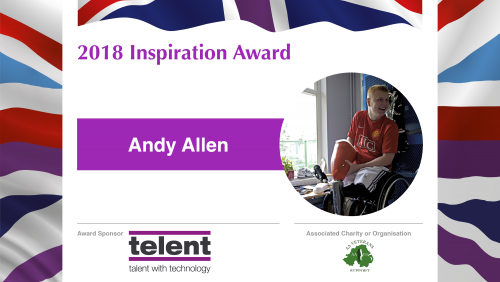 Andy was horrifically injured in Afghanistan, losing both legs and partial vision from an IED. Despite his life changing injures, Andy overcame adversity to become a role model for others. In 2010, he co-established AA Veterans’ Support to help people who serve or served in Northern Ireland. He also raises thousands for other charities, such as Blind Veterans UK. In 2014, Andy entered politics and always displays a selfless attitude. 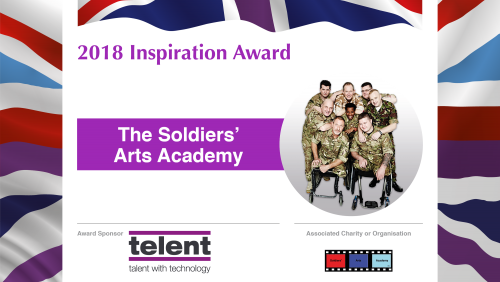 The Soldiers’ Arts Academy CIC is a platform for injured military personnel to access the arts – including theatre, poetry, dance, music and creative writing. It teaches new skills and develops confidence and self-esteem, providing a path into the local community and work. Taking part in productions has been life changing for some people who face their own personal battles with PTSD, depression, anxiety and physical injuries sustained in combat.

In recognition of a person, team or organisation that has demonstrated an enduring commitment and collaborative approach to supporting the sector within the wider community 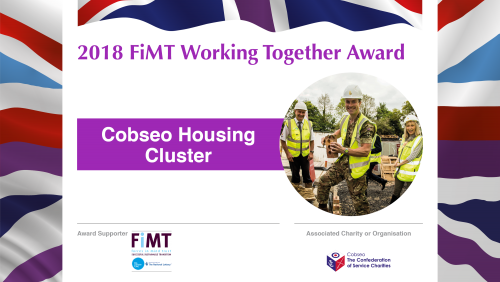 The Cobseo Housing Cluster is relatively new. Three years ago, 30 separate Veterans’ housing organisations had barely met each other. Creating the Cluster enabled the individual members to work together to achieve shared objectives. Collaboration has been a guiding principle, and each meeting is hosted by a different member. These meetings alternate between locations to reinforce the importance of all members, as well as encouraging people to attend.

In recognition of outstanding achievements and comradeship demonstrated internationally, by individuals, groups or organisations in support of the British Armed Forces Community 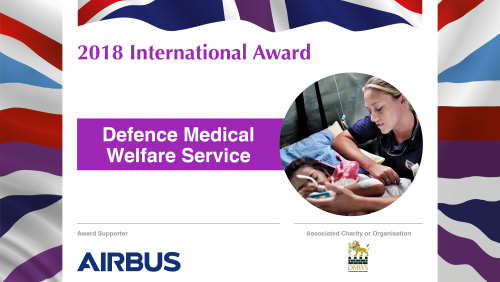 DMWS is rich in international history. Dedicated Welfare Officers have been deployed alongside the Armed Forces since 1943, providing humanitarian aid to over 1 Million patients and demonstrating truly international acts of personal sacrifice, comradeship and welfare support. In the shock and stress of the most difficult moments, DMWS is there to support our Armed Forces, ensuring that no soldier faces their catastrophic injuries or illness alone. 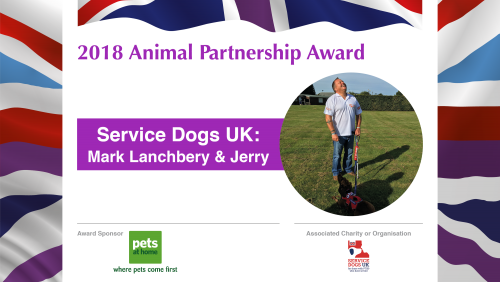 Service Dogs UK supports service men and women, and gives a purpose and loving home to rescue dogs – training them as Assistance Dogs. Mark Lanchbery was seriously injured in conflict and diagnosed with PTSD. In 2016 he began training with his loyal companion, Jerry. Mark is now a mentor for the charity and helps run its training programme. He battles on, providing hope and inspiration to all those around him. 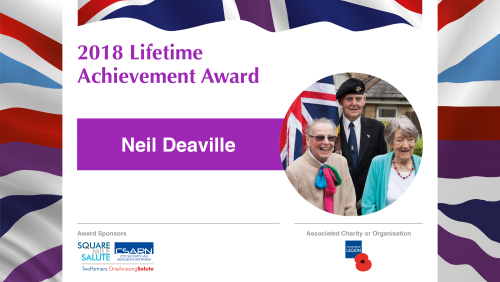 Neil has been active member of Hayfield Royal British Legion since 1963. Over 54 years he has provided selfless commitment, dedication and support to the armed forces family. The list of Neil’s activities is almost limitless; visiting veterans, organising day trips, accompanying essential doctors and hospital appointments and running errands. Neil has been known to walk through snow with a wheelbarrow of provisions for those in need. Neil is both a branch ambassador and Standard Bearer. 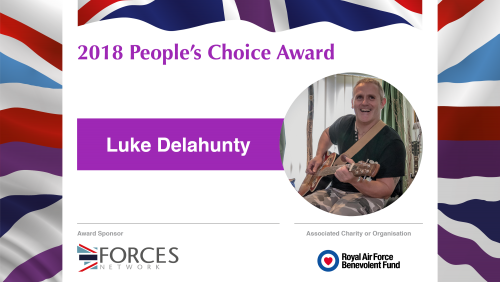 A motorbike accident instantly changed Luke Delahunty’s life and, paralysed him from the chest down, the RAF Regiment gunner suffered months of painful recovery. Luke found respite in sport, taking up hand cycling, rowing and wheelchair rugby, representing the UK twice in the Invictus Games! Luke is an inspiration, mentoring spinal injury patients facing the same bleak diagnosis. He also talks in schools to demonstrate overcoming adversity and achieving goals.

In recognition of a new business, that was started by an individual linked with the armed forces, that has been in business for less than two years 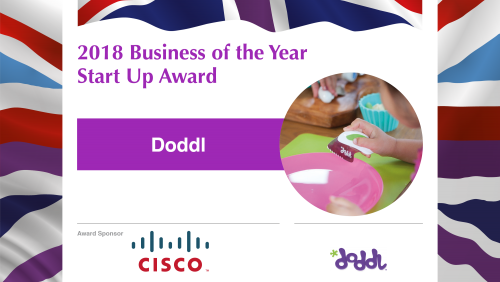 Doddl was founded in 2013 by sisters Catherine Dodd and Rosie Phelps-Goggin, an ex-RAF Intelligence Officer. Their concept of redesigning children’s cutlery with ethical principles saw 40 prototypes and 18 months of research and testing before launching in 2016. Working in conjunction with child development specialists, and with support from nine organisations and a successful crowdfunding campaign, Doddl cutlery is now transforming family mealtimes in 28 countries worldwide!

Business of the Year Award – Scale Up – Sponsored by sage

In recognition of a business, that was started by an individual linked with the armed forces, that was established over two years ago and still retains a minimum of 51% interest in the venture 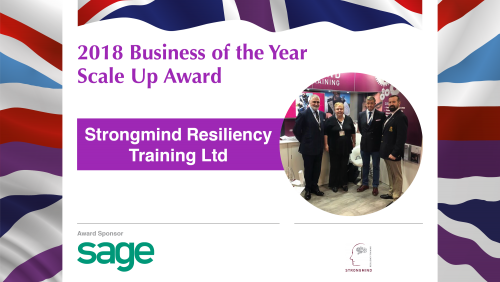 In recognition of a business, that was started up by an individual linked with the armed forces, that has a made a real impact to the Armed Forces Community 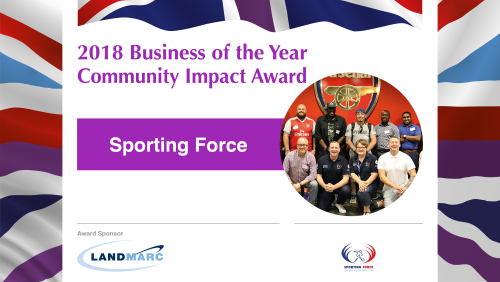 Sporting Force Ltd works with professional football clubs to provide work placements and courses for ex-military personnel. Its CEO, Tommy Lowther, is a veteran who was diagnosed with PTSD and wanted to help others through his passion for sport. With X-Forces’ support, he set up the charity in 2016; today, it benefits over 300 veterans with social events, free match day tickets, training and, for some, help into paid employment.

In recognition of a finalist that the Directors agreed should deserve special recognition for their outstanding contribution. 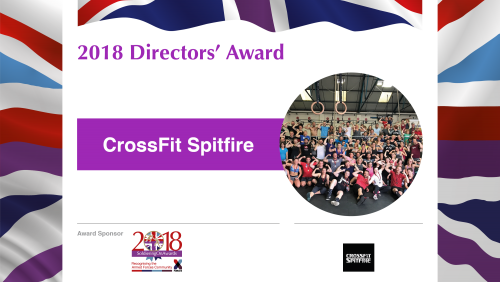 During his time in the RAF, David Smith developed a passion for fitness, functional movement, strength and conditioning training. On leaving the RAF he conceived his business idea to provide a universal CrossFit  training programme for participants ranging from the very young to the elderly; from athletes to those suffering health conditions such as heart disease. CrossFit Spitfire launched 2016 and attracted 150 members in its first year. It has a significant following and is improving the fitness of many people.