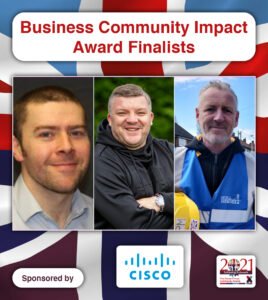 This award is generously sponsored by CISCO.

A spokesperson from CISCO confirmed that, “Cisco are proud to be associated with Soldiering On Awards, X-Forces and the British Armed Forces, especially during these unprecedented times. It is both an honour and a privilege to be involved with this wonderful event, especially noting the drive and determination of the finalists to deliver positive impact within their communities – you have our total admiration.”

The Finalists for the Business Community Impact Award are: 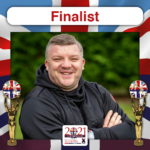 Combat2Coffee was founded in 2018 by former soldier Nigel Seaman as a Community Interest Company. Nigel was recovering from depression and PTSD, and wanted to help other veterans suffering with mental health issues, so he trains them as barristas, then helps them to find employment in the growing coffee shop sector.

Initially, Nigel converted a caravan and horse-box into mobile coffee shops helped by a team of veterans from all three services. These were taken to events to generate the revenue required to cover their operating expenses. Importantly,  they also became places where veterans could meet for companionship.

After seeing Nigel on TV, the Governor of HM Prison Hollesley Bay invited him to create the “Lansbury” coffee shop within the prison. Residents working on the project included veterans coming to the end of long sentences. The personal skills and self-confidence they have gained will enable them to work for Combat2Coffee on release, with a proper wage and access to peer group mentors. Further facilities have since opened, where veterans can gain valuable work experience.

“Despite problems caused by Covid – and Nigel having a leg amputated – Combat2Coffee has extended its reach, especially among veterans serving custodial sentences. Other prisons would now like to replicate the experience.”

The Landsbury is self -funding, with the cost of refurbishing minimised by companies donating materials as part of their community engagement programmes.

“The company now roasts its own beans which has reduced costs and enables it to sell high quality coffee at reasonable prices to a number of outlets including schools, service units and charities – as well as a growing monthly subscription delivery service.” 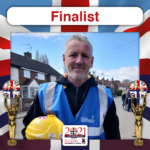 Paul Matson, Hull 4 Heroes founder, had a rocky transition into civilian life and ended up homeless for a while. With help, personal strength and the discipline learned during his time in the military, Paul came back fighting. With a successful business in the building trade, he wanted to give others the support he had received, and Hull 4 Heroes was formed.

Paul jumped at the opportunity to be involved in the BBC’s DIY SOS Big Build in Manchester, creating a ‘Veterans’ Street,’ but wanted to offer more. So the next chapter is under way with the building of the world’s first transitional Veterans’ Village, to support veterans and their families in transitioning into civilian life as seamlessly as possible.

“The charity has secured a 22 acre site to develop the self-sustaining village, with 48 residential units for single veterans and families. This Veterans’ Village is set to become a real beacon of hope and change.”

Hull 4 Heroes now supports over 400 veterans and their families. During the pandemic, volunteers organised and delivered food to more than 50 vulnerable veterans each day. The team also made over 400 welfare calls per week and supported the most vulnerable by helping them out of homelessness, back into employment or simply connecting them to the outside world with free tablets and internet.

“Particular thought has been put into the way the charity and village will work hand in hand with the local community, incorporating many opportunities for people outside of the forces community to benefit from the project, cementing its place for the future.” 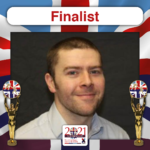 John, a former captain in the Parachute Engineer Regiment, left the Army in 2012 to join the NHS where he specialised in innovation and service improvement practice. Identifying a business opportunity, his idea of brokering workforce skill with demand led to him establishing Hexitime CIC in 2020.  The business successfully provides savings for the public sector and potential to change how it operates its workforce.

The business is a pioneer of the concept of timebanking and how it brings higher performing, satisfied and more cost-effective workforces. The successful platform is used as far afield as the Australian Health Department. The revolutionary impact of the technology won the company three technology innovation awards in its first year at a regional, national and European level, and earned a place on the prestigious NHS Clinical Entrepreneurs Programme. John has delivered a TED talk on the story, and won multiple grants for the work Hexitime does to reduce inequalities in health.

“So far, the business has saved the health system an estimated £200,000 of financial expense by re-deploying internally funded skills and avoiding external consultancy. It is the biggest healthcare timebank in Europe, and has supported more than 400 healthcare improvement projects.”

The technology platform has opened the way for military personnel and veterans to freely and openly collaborate their skills with the NHS – and conversations are underway with the military to create an exclusive platform just for military skill-sharing internally!

“Remarkably, the community interest company remains not-for-profit, independent, and true to the military and public sector values instilled in it by its founder.”