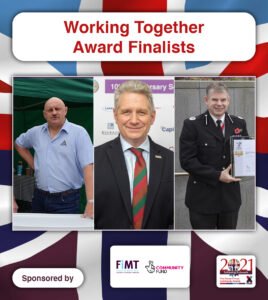 This award honours a group of people, team or organisation that has demonstrated an enduring commitment to a collaborative approach, engaging with each other and other external organisations to support the sector within the wider military community.

Once again, this award is generously sponsored by Forces in Mind Trust, a charity that provides an evidence base that influences and underpins policy making and service delivery in order to enable ex-Service personnel and their families to lead successful civilian lives. The organisation also awards grants that aim to improve the transition process for veterans and their families.

You can read more about Forces in Mind Trust here.

“Coming in new to the Sector, I have been inspired hearing about the work of this year’s brilliant finalists. They have all shown an enduring commitment to collaboration, and each of these can be held up as a great example of what can be achieved when working together. It is a privilege to be able to recognise the difference these organisations have made to the transition of ex-Service personnel. These excellent partnerships have benefited many aspects of veterans’ civilian life including health, housing and employment, and Forces in Mind Trust are delighted to be able to recognise them with the Soldiering On Awards.”

Fiona Dolman is the Ambassador for this category; you can read about her support for the Soldiering On Awards here.

The three finalists in this category were shortlisted from an extraordinary group of thirty eight different nominations representing a huge variety of deserving collaborative initiatives from across the UK. Congratulations to these three initiatives.

The Finalists for the FiMT Working Together Award are: 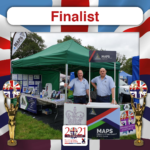 Military and Police Support of West Tyrone (MAPS) is an award-winning independent charity, set up in 2011 and based in Omagh, County Tyrone. It brings together various military and police associations to support veterans under one umbrella.

The troubles in Northern Ireland produced many hundreds of both military and police veterans. MAPS’ two founders were diagnosed with PTSD following terrorist incidents, and they recognised that both groups had encountered similar problems. Both also felt that after service they had no one to turn to, feeling alone and abandoned; they did not want others to feel that way.

MAPS realised that there was a massive underlying problem of mental health and personal security issues. The brutal stories they heard were often shocking, but convincing someone to talk after more than 40 years wasn’t easy, and required gentle persuasion.

“I have seen first-hand the work executed by MAPS and can only be impressed and proud of their achievements. They have torn up the rule book and formulated a new one, so simple but effective.”

MAPS has been such a success in the region, not only as a veterans’ charity, but also for its wider partnerships. This has been achieved by bringing together a network of more than 15 partners from military and police organisations, all collaborating to pool resources and provide first class advice and support.

With a current membership of 900, around 15 clients a day use MAPS’ services – which, for a small rural town, is remarkable. Volunteer commitment is equally extraordinary.

“This nomination has been asked to be special. Sadly this one is not. It is extraordinary. Collaboration, or joint effort, would be nothing without that effort. My experience of MAPS is that it is a veterans’ charity the armed forces community should be immensely proud of and promoting. They have gone against the norm to build up partnerships that work in harmony with each other and continue to seek out new associates.” 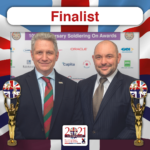 Veterans’ skill sets can provide sustainable answers to many of the challenges facing businesses.  Collaboration is the life blood of the initiative, and world famous automotive brands rely on Mission Automotive’s expertise and partner structure to employ extraordinary people in second careers beyond their service.

Mission Automotive has built an enormous stakeholder community to extraordinary effect, and all with positive outcomes for the Armed Forces community. From providing veterans with fulfilling sustainable careers and plugging critical skills gaps, to emergency logistics with RE:ACT, with vehicle fleet loans to facilitate and scale logistics efforts in support of the NHS.

Since 2019, Mission Automotive has engaged with 65 companies, from multinationals to tiny specialists. Clients now actively seek out veterans as a source of talent, and advocacy and mentoring is leading other organisations to commit to the cause.

Organisations like Jaguar Land Rover who have employed more than a thousand service leavers, have been the presenting partner for the Invictus Games, and secured a revalidation of their Gold award status, are now amongst the initiative’s most ardent and vocal advocates. Despite all the challenges of Brexit and Covid, the initiative is growing daily. Mission Automotive also brokered a number of collaborations which saw client organisations support other COBSEO members.

“There is huge utility in harnessing the core learnings across other sectors and across Defence’s multifaceted interactions with employers. This the subject of ongoing work.” 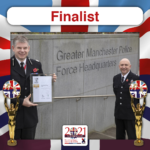 Greater Manchester Police (GMP) services a community of 2,800,000 people, of which around 250,000 are members of the Armed Forces community (AFC). Officers interact with these people daily – as colleagues, vulnerable victims, witnesses, and also as offenders.

A team of 35 Armed Forces leads who are predominantly veterans themselves work across all districts to provide community support. It has resulted in GMP receiving interest from many other forces and even organisations outside of policing. The group has supported UK police forces as far afield as Jersey, as well as other organisations including but not limited to the BBC, Cadent Gas and Mitie. The group helps other police forces to introduce a minimum national standard for the Armed Forces community who have had contact with the police anywhere in the UK.

“Bringing the community together has highlighted the benefits peer support can bring to their staff within the police force who may be struggling. But, more importantly, they’ve developed bespoke pathways of support for vulnerable veterans and those in trouble with the criminal justice system.”

GMP is the top performing force for the numbers of vulnerable veterans it refers to Project Nova, and is responsible for the Veterans Gateway having more activity than any other area of the country. GMP employs around 1100 Armed Forces staff and recognises the skills these reservists and veterans bring into GMP and its specialist departments, such as Firearms and Counter Terrorism. Veterans are encouraged toward these teams to maximise their military skills.

In 2020, the force achieved Gold status in the Armed Forces Covenant Employer Recognition Scheme awards. It is one of only 5 Police Forces to have done so and continues to help the group’s aim of becoming the most armed forces friendly police force in the country.

“Innovation has been behind much of the group’s work. No other force in the country has a structure and governance in place, and recognised staff association with an entire network of leads and champions, ensuring the service to the AFC is the best it can be. GMP has also approached the National Police Chiefs Council to put itself forward as National Policing Lead for the Armed Forces Covenant which would give the armed forces leads wider scope to build the work in every other police force.”