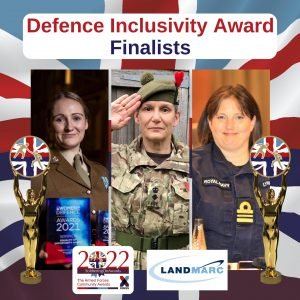 This award honours the commitment and achievements of an individual, team or organisation in delivering greater diversity and inclusion within UK defence and the Armed Forces community.

Once again, this award is generously sponsored by Landmarc. Originally created in 2003 to provide facilities management and support services to the Ministry of Defence, Landmarc has grown to deliver insightful, innovative consultancy and practical services that help to deliver military and civil protection training across the world.

“As proud sponsor of the Defence Inclusivity category, this is an exciting time for us as we learn all about this year’s incredible finalists. Each of our finalists has been hugely successful in achieving greater diversity and inclusion throughout the Armed Forces Community and we congratulate them all.”

Since the launch of the MOD’s Diversity and Inclusion Strategy in 2018, Soldiering On Awards has been shining a light on those that are proactively making things happen. This category in particular gives everyone in the Armed Forces community the opportunity to celebrate some fantastic stories, and shows how changes are happening to shape a positive, diverse and inclusive future.

The Finalists for the Defence Inclusivity Award are: 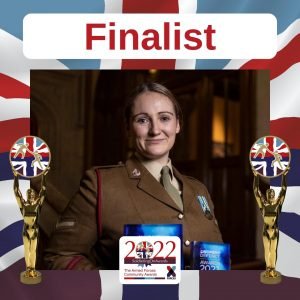 Natasha joined the army in 2014 and deployed on various overseas exercises and an op tour. After returning from maternity leave, she set up the award-winning Defence Breastfeeding Network to support servicewomen who continue to breastfeed when they returned to work.

Natasha runs the network alone, supporting over 900 families, and has opened 22 breastfeeding rooms in military establishments to support women in the workplace. She’s organised and trained 60 breastfeeding peer supporters, is part of the commander field army’s gender council and instigated the policy change in dress regulations so that women can claim up to £200 back on mess dress alterations after maternity leave. This eases the financial pressure of returning to work and ensures that women are not disadvantaged because they have had a baby.

“Natasha’s charity work, kind nature and drive have enabled her to single-handedly change the way breastfeeding is seen in the armed forces, making the return to work process for families easier.”

To raise awareness, Natasha organised for breastfeeding to be added to MATT 6, and a policy change she worked on with the maternity and pregnancy passport has helped women across the entire armed forces.

Natasha has achieved all of this whilst undertaking her paramedic course and carrying out shifts for the NHS during the pandemic. She completes extensive charity work is constantly told how much of a difference she is making to people’s lives.

In addition to all of this, Natasha is raising a toddler!

“Her support has enabled families to continue to breastfeed, which has aided in retention, reduction of post-partum depression, and support to families during deployments.” 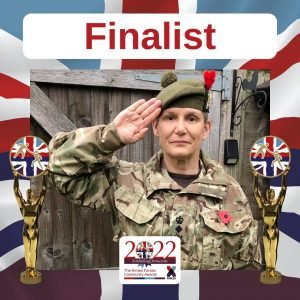 There are some 40,000 young people in the Army Cadet Force (ACF), led by around 10,000 adult volunteers. In 2019, it was recognised that diversity and inclusion needed to feature more on the ACF agenda alongside the core values and standards. This was achieved under Lt Col Gilly’s leadership of the ACF Step Change Diversity and Inclusion project.

As Project Officer, Gilly rose to the challenge of addressing the need to embed all aspects of Diversity and Inclusion into the ACF alongside the values and standards.  With unstinting enthusiasm and energy, she worked day and night to ensure and drive a change in awareness and understanding. Gilly ran nationwide celebratory events and conducted a survey of 2000 volunteers to ensure that the project’s work was based on empirical evidence.

The change in culture has been palpable. People are behaving in an inclusive way and now understand and are more supportive of differences in background, abilities, culture and belief. Over 500 people have attended workshops on disability, learning difficulties, gender identity and trans awareness.  DIversity and Inclusion is now the golden thread throughout all ACF training and activities.

“Gilly’s passionate and innovative approach made a real difference to the success of the project… Her vision remained at the forefront of all activities, which were aligned at all times with the Army Cadets’ core values and standards.”

Recognising the value of ‘lived experiences in helping to change culture, Gilly reached out to individuals with moving personal stories to bring their experiences to workshops, conferences and other media. These open, honest and human contributions were hugely effective in raising awareness and changing attitudes.

“Several individuals remarked that the ACF Step Change gave them hope that things were changing and their differences were becoming accepted.” 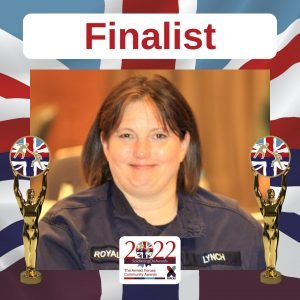 Lt Com Suzanne Lynch joined the Royal Navy Reserves in 1989 and is currently employed as the Staff Officer of the Specialist Engagement Team in Wales and Western England. As a primary school teacher specializing in Early Years and children with behavioural needs, Suzanne balances her civilian and RNR careers simultaneously and was awarded the ‘Queen’s Commendation for Valuable Service’ for her work.

Passionate about the Royal Navy, Suzanne’s drive and commitment is evident, and she works tirelessly delivering activities to raise the profile of the Navy in educational establishments, youth groups, religious organisations and community groups. Committed to youth development as both a teacher and Naval Officer, she spends much of her time working with young people from diverse backgrounds and helps to develop life skills that will benefit them throughout their lives.

“Suzanne is always enabling the Armed Forces to develop relationships with diverse communities. She offers support and guidance and willingly gives of her time; nothing is too much trouble and she always has a smile on her face.”

Suzanne combines her naval service and extensive teaching experience with her love of working with young people and members of diverse communities. She is a role model for young women, particularly from the Muslim community. She has developed close friendships with some of the women’s groups, especially Banatul Musalmeen (Daughters of Islam). Suzanne works tirelessly to develop community cohesion between the Navy and all communities, where she fully supports differing aims and ethos.

“Suzanne is an amazing person with a charismatic personality… As a female role model, she is able to connect with women from BAME communities, especially from the Muslim community.”