This award honours the unique relationships and companionship provided by animals, and/or the achievements of individuals or organisations engaged with animals that support and empower members of the Armed Forces community. The winner of this award will be chosen through a public vote.

Which of our three incredible finalists will inspire you to vote for them? Read the articles, watch the videos and cast your vote. Voting goes live from 17:00, Monday 23rd August. Voting will then close at 20:00 on Sunday 5th September. You can only vote once so make it count and spread the word! 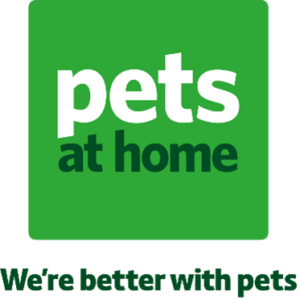 This award is generously sponsored once again by Pets at Home, the country’s most loved pet supplies retailer.

“At Pets at Home, we understand what a positive impact pet ownership can have on people’s lives and wellbeing. This particular category not only goes through the rigorous internal judging process but the chosen three finalists then go through to a public vote. We’re extremely proud to sponsor the Animal Partnership Category in celebration of these exceptional animals, who provide invaluable support to their owners and the wider veteran community.” – Sarah Woodward, Commercial Marketing Manager, Pets at Home

Pets at Home sells pet products including food, toys, bedding, medication, accessories and pets. It is listed on the London Stock Exchange and is a constituent of the FTSE 250 Index.

Best-selling author and filmmaker Levison Wood is the ambassador for the Animal Partnership Award.

In terms of the finalists, well of course dogs are always popular in this category, and we have three stand-out dog based partnerships to celebrate: 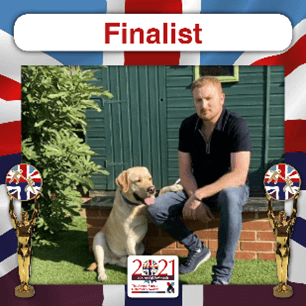 Richard Mearns and Assistance Dog Ziggy are an inspirational example of a veteran and dog partnership. Having overcome severe PTSD from his military service, and with significant mental health issues, Ziggy’s support enables Richard to hold down a high pressured job.

Richard campaigns tirelessly for recognition of the access rights of Assistance Dogs and works towards them being recognised as the equivalent to Guide Dogs. Equality legislation means that, in law, they have the same access rights, but educating the public, businesses and services is essential for access to be granted to all registered Assistance Dogs.

Richard frequently deals calmly and politely with people who do not understand the Equality Act and refuse him admission to restaurants, shops and access services.

Undaunted by this huge task, Richard has built a significant public profile for Assistance Dog Ziggy. His positive and inspirational social media presence has been incredibly important during lockdown, with beautiful, uplifting and funny pictures and videos of Ziggy in action.

“They have become role models for people partnered with Assistance Dogs, particularly where there have been issues regarding access, which can be devastating to veterans living with mental health issues.”

Richard and Ziggy have helped the Bravehound charity with advice and support through some difficult times. Ziggy has supported Richard through the toughest of days, enabling him to set up a podcast site and to take part as an expert panellist in Bravehound’s “Theatre of War” project, where he joined Combat Stress’ head of Medical services to discuss PTSD with an online audience of several thousand people.
Richard speaks openly about his struggles with PTSD and it is through his partnership with Ziggy that he has been able to turn his life around and be a fully active member of the community.

“Richard remains positive and focused and is a wonderful example of the spirit of the British Armed Forces; and his extraordinary partner, Assistance Dog Ziggy, is a fantastic example of the power to heal and support.” 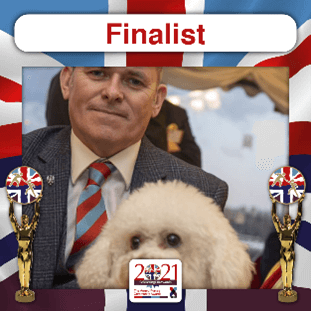 After leaving the army in 1991, Barry suffered constant pain, insomnia, sadness and depression, and was later diagnosed with CPTSD. He became shy, introverted and angry.

Beautiful Bella Bichon came into his life in 2015 at the age of 21 weeks, following a traumatic start in life. Filthy, fearful and feral, she crawled towards Barry and lay shaking. It was immediately obvious that there was something very special about this little dog. During the night, as Bella became aware that Barry was struggling with nightmares, she licked his neck, soothing and helping him to settle.

Barry’s confidence quickly grew. Bella passed her Pets as Therapy assessment in 2016 and then qualified as an owner-trained Assistance Dog. The duo began volunteering locally at hospitals and schools, then Barry became confident enough to give talks on Animal Assisted Therapies for Palliative Care, End of Life moments, Intensive Care and Children’s Wards.
Barry missed the comradery of army life and knew that other veterans may be struggling too. He approached Combat Stress to offer his and Bella’s support. Within weeks they became an essential part of the Clinical Therapeutic Team.

“Bella recognises people needing support. She uses Deep Pressure Therapy, leaning into them so that they stroke her and, in doing so, release endorphins, giving a sense of calm. Then, using his own empathy, Barry allows veterans to relax so that talking is easier.”

Barry and Bella promote veterans’ mental health awareness at every opportunity – including at the Brighton Marathon, air shows and with the Armoured Corp Display Teams, as well as in local superstores and shopping centres. They are also established members of a local veterans’ drop-in charity where they welcome new veterans and enrich their lives. Since finding each other, Barry’s life has become one of joy, hope and purpose, as has Bella’s.

“Barry & Bella are making a difference! This Dynamic Duo are proud to have won several local awards and accolades. Seeing hope and happiness in people’s eyes is priceless.”

Dale McGleenon and Leffe the Frenchie 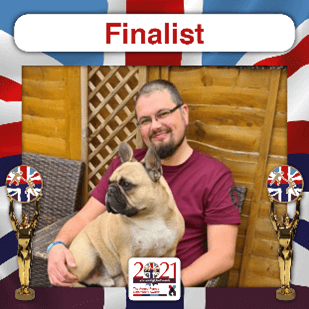 When Dale McGleenon was medically discharged from the Royal Air Force Police in 2020 with severe chronic PTSD linked to his job, his wife Colleen suggested getting a dog. Colleen was Dale’s rock in his battle with PTSD, so he started to refer to Leffe as his pebble!

Dale’s police work as an investigator had caused his PTSD; he had unmasked some unsavoury criminals, leading him to mistrust people. As a result, he became housebound unless accompanied outside by his wife. Leffe has helped to overcome Dale’s fear of going out and, as they walk together, Dale talks about his traumas. It’s impossible for Dale to open up in this way with other people, as he feels he would be harming the person he was speaking to. Leffe, however, is a willing listener.

These walks gave Dale the idea to start recording videos, which are now on his YouTube channel: PTSD Warrior & His Dog Leffe. The channel educates people about online child safety, PTSD and wellbeing, and Dale hopes it will help others.

“Dale’s experiences were extremely traumatic and negative but he has found positivity in speaking out, continuing the conversation and removing the stigma that is unfairly attached to mental health issues. Leffe has had a massive influence on his ability to do this, hopefully meaning that others can learn from his experience and seek help earlier, enabling them to have a better chance of recovery.”

Leffe knows when Dale is upset, having a flashback or becoming angry. The Frenchie will place a paw on Dale’s arm or sit with him companionably. Although he is not a trained support dog he knows that he is helping with his special ability to wash aside sadness, anxiety, stress and anger.

“Without Leffe, Dale would probably spend many more days in bed, not interacting with anyone and rarely leaving the house. Instead, he looks forward to spending time outdoors together. Leffe is Dale’s pebble and wingman as they move forward in their journey to battle PTSD.”