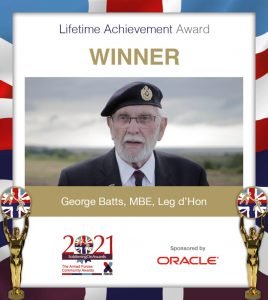 An award to honour a person whose lifetime of dedicated service has provided a significant contribution in support of the Armed Forces Community.

George has dedicated his life to providing for the welfare of the Normandy veteran community and was instrumental in the creation of the British Normandy Memorial – an achievement borne of his determined campaigning, fundraising and unwavering commitment. 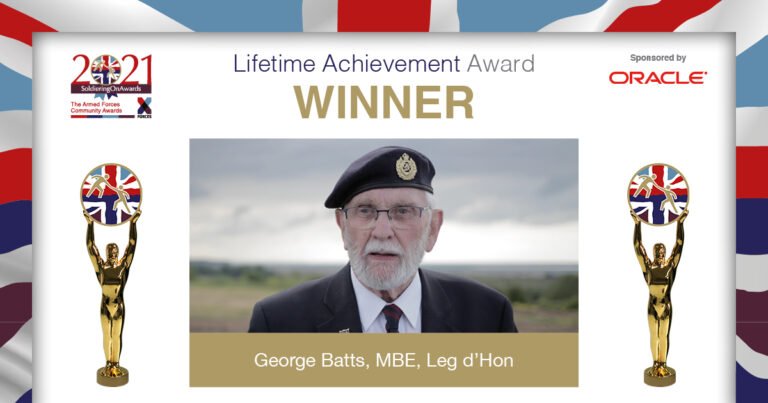 Throughout his life, George maintained the ambition to build a worthy memorial in France to commemorate those that died on D-Day and in the subsequent Normandy Campaign. Seventy-seven years after the battle, his dream was realised when the British Normandy Memorial officially opened on 6th June 2021 – an achievement borne of George’s determined campaigning, fundraising, media engagement and unwavering dedication to the remembrance of the 22,442 servicemen and women who sacrificed their lives for our freedom.

I started canvasing in 2010-2011 for a memorial to cover everyone who was killed in the Normandy campaign. I didn’t get the support I wanted initially, but in September 2014, I wrote to David Cameron, he backed me, and I got £20million out of the LIBOR funds to start it, and now it’s finished.

3 days ago I was in Normandy seeing it for the first time. It was so emotional, but at that time I couldn’t think. It was a couple of hours afterwards when it really hit home. I had approached so many people and got turned down, but there it was, with little me having started it all! I’m so proud of that. Also, may I please thank everybody who nominated and put me in the position of winner. I can’t express appreciation on that, if I do, I’ll start to cry!”