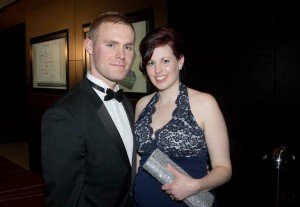 At the 2011 Awards Mark Ormrod won the ‘Overcoming Adversity Award’.  You can read watch his story HERE:  We asked Mark what his thoughts were about winning the Award.

“I was fortunate enough to be nominated for and to be the recipient of the Overcoming Adversity Award at the inaugural SOTLT Awards Evening and it is something in my life that I am extremely proud of and grateful for. What made the event even more special for me was to see the calibre of the other award winners that were present that night. All of them were extraordinary individuals and that for me really helped to add meaning to the event, there were some really great people there and I felt honoured to be amongst them.

I was lucky enough to have the award presented to me by the actor Anthony Andrews and after meeting him that night & the host of other celebrities that were present I knew that they really wanted to be there because it meant something to them and that again helped add meaning to the event. I’ve been lucky enough to be invited back every year since the first event and each year it gets better,  you hear great stories not just from serving or retired soldiers but from their families and supporters as well. The SOTLT Awards really are great and I hope they continue for many years to come.”