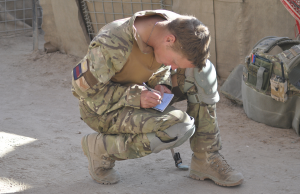 After War: A panel event on war trauma and PTSD

As we approach the centenary of the First World War, and in the year British troops withdraw from Afghanistan, Open City Docs Fest brings together veterans, psychologists, artists and journalists to discuss the trauma of war and its legacy – post-traumatic stress disorder (PTSD).

The panel will look at the history of post-traumatic stress disorder and show how the way it has been reported, understood, and responded to over the last 100 years has changed dramatically.

The event will be chaired by Stuart Hughes, BBC News Senior World Affairs Producer. Stuart lost part of his right leg in a landmine explosion in Iraq in 2003 and was later treated for PTSD. He will be joined by guest speakers including:

Jake Wood, Veteran diagnosed with chronic PTSD on his return from Afghanistan, and author of ‘Among You’.

Ben Shephard, Military and Medical Historian, and author of ‘A War of Nerves’.

Derek Eland, official war artist embedded with the British Army in Helmand,  Afghanistan 2011. He portrays the emotional accounts of soldiers, written in the immediate aftermath of battle.

Kevin Weaver, a former war correspondent diagnosed with PTSD, who was shot and wounded in 1992 in Sarajevo, covered Rwanda’s genocide and the Kosovo conflict before becoming a teacher and artist.

Contributions and questions from the audience will be very much welcome.

All proceeds from the event will go to a veterans charity.