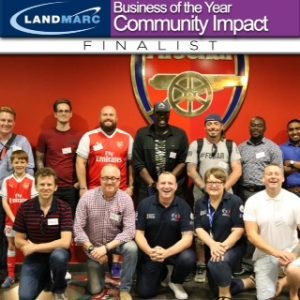 Tommy recalls the early days when he founded Sporting Force, which was established to support former members of the Armed Forces Community through professional sports. Tommy was working very closely with Help for Heroes on his plans for Sporting Force at the time and recalls reading the publicity and communication about finalists and winners.

Tommy remembers specifically, all of the threads of coverage on social media outlets and photos and videos of the evening; seeing the many different people sharing the positive news of the achievements and collaborations on behalf of veterans. Those being recognised and celebrated at Awards night ranged from individuals, animals, organisations, businesses and many more. In Tommy’s words “I was completely hooked and have strived to be a contender for the awards ever since”.

Tommy had seen through past winners what winning the awards has done for them. “I have seen pretty small organisations blossom and become much bigger and more efficient businesses. I have always been very enviable of past winners, repeatedly saying every year to the Sporting Force staff, that’s the one I want. We have been nominated for other non-sector business awards and have won, which is a fantastic achievement. However, to be recognised by the very industry you operate in and recognised amongst some of the past winners and finalists is something that is extra special”.

When Tommy found out when he had been shortlisted for the award, this was a huge compliment, and something he had waited three years for. Tommy said “To find out we were in the final three; invited to attend a reception evening at the houses of parliament; and further to that invited to attend the awards evening itself was an unbelievable feeling. In my eyes that was where the journey ended for Sporting Force, due to the calibre of opponents we were up against in our category.”

On Awards night we were lucky enough to have a table full of our beneficiaries join us, which made it all the more special, however when our category come up for presentation, I immediately looked around at one of our opposition, ready to applaud him. But all I heard was ‘the winner is Sporting Force’ it took a good 3-4 seconds to realise that we had won the award. I immediately burst into tears, all the emotions of, the hard work; the commitment from the Sporting Force staff; the countless hours I had worked on my little table at home at the start; the horrific time I had trying to fight my PTSD. The fact that founding Sporting Force was the very thing that stopped me completing suicide, and the sacrifices that people had made in order for us to be sat in that room that night was completely overwhelming, and a feeling that I will never forget. We have achieved great things as a charity over the last four years and winning this award is up there with the best of them.”

Tommy would like to inspire the military community to nominate individuals, charities, animals and businesses that are striving to help better the lives of veterans. In his own words “Why not give them the opportunity to experience what I have had the pleasure of experiencing, this award doesn’t just come with the feel-good factor, it comes with some real weight in the industry, with many other perks that can elevate businesses to new levels. I would urge anyone out there to go out and nominate, help others be recognised for their fantastic efforts and contributions”.

To find out more about sporting force Ltd visit: