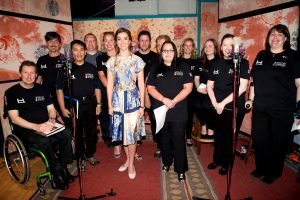 Those of you who attended our 2018 award ceremony will remember being treated to an outstanding performance by classical singer Carly Paoli.  Well… Carly has recorded a track featuring the Invictus Choir which has knocked Drake off the number 1 spot in the iTunes video chart! We’re very proud to say that Carly performed her song, “Liberty,”  live – for the first time ever – at the Soldiering On Awards – as a tribute to RAF 100.

Click here to buy the video or recording on iTunes.

Classical BRIT nominee Carly Paoli is joined on Liberty by the Invictus Games Choir, a community choir for serving and veteran personnel from all services, who are wounded, injured or sick, to help them in their recovery. The Choir were Soldiering On Awards Finalists in the 2018 Forces Network People’s Choice Award, and we introduced them to Carly as we knew the choir would be amazing to record the song with her for her video, single and album – and their individual stories are so true to the words of the song.

The recording choir comprised 12 volunteers from the Invictus Games Choir, representing all branches of the Armed Forces. The group consisted of 1 Serving Soldier in the British Army as well as 8 Army Veterans, 1 Royal Navy Veteran and 3 Royal Air Force Veterans.

The song is written by the Grammy Award winning songwriter Walter Afanasieff whose many credits include hits for Celine Dion, Barbra Streisand and Mariah Carey. Featuring The London Symphony Orchestra, the song was recorded at Abbey Road and Strongroom Studios and is conducted by the Grammy award winning Steven Mercurio. It also features the world renowned flautist Andrea Griminelli, the 65 piece Abiah Symphony Orchestra and the winners of the BBC’s Songs of Praise Choir of the Year 2016, Tring Park 16. The concert received a glowing 4 star review in the Mail on Sunday, from Classic FM’s David Mellor, under the headline ‘Nobody does it better’.

Speaking about the entering the chart at number 1 Carly said “I am over the moon that the first time I achieve a No1 hit is with an amazing song, ‘Liberty’ and that I recorded it with my wonderful friends from The Invictus Games Choir. What makes it even more special is that because proceeds from sales are going to Help for Heroes, it is testament to the fact that people are enthusiastic about supporting a good cause – in this case the brave men and women who have been affected by their service in the Armed Forces.”

Proceeds from the single will be donated to Help for Heroes to help military personnel, Veterans and their families affected by their service on their recovery journey, with activities like the Invictus Games Choir.

We are delighted to announce that Carly has agreed to become the Soldiering On Awards Ambassador of Arts!

Click here to buy the video or recording on iTunes.