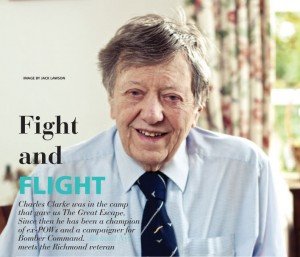 With thanks to Sheengate.co.uk for this fabulous article.

Truth, to paraphrase Aeschylus, is always the first casualty of war. Little wonder then that so many war films are, if not quite mendacious, then tinged with a subtly deceptive hue.

It’s 70 years since 76 Allied prisoners-of-war tunnelled out of Stalag Luft III near Zagan, now in Poland, en route to what for most would prove a brief taste of freedom – and immortality on the big screen. The Great Escape: Steve McQueen, Richard Attenborough, James Garner; Oxford accents and stiff upper lips; cavalier heroics and derring-do.

Except, of course, that it wasn’t like that at all. Ask Charles Clarke – or Air Commodore Charles Clarke OBE, to give him rank and recognition – Richmond’s nonagenarian survivor of Stalag Luft III. Imprisoned in 1944, the 17-year-old from 619 Squadron, Bomber Command was among those who stayed behind while the real-life Attenboroughs and McQueens made their escape. As such, he knew the men behind the myth and experienced the brutal postscript to an adventure gone wrong.

“You read so much rubbish about the escape,” reflects Charles, shuttling back and forth across a drawing room awash with reminders of his wartime past. “If all the people who subsequently claimed to have been involved had really been there, the camp wouldn’t have been big enough to hold them!

“The film was very boy scoutish. To hear the accents, you’d think that all POWs were officers, when actually 75% of them were not. Still, without the film, who would remember the 50 who died?”

Apart, that is, from those like Charles himself who were there when the camp commandant gave them the news: 73 of the escapees had been recaptured, 50 of them shot – murdered, if you will – by order of Berlin.

“Things were different at the camp after that,” muses Charles. “Until then the Germans had pretty much played it by the book. This was the first time they’d sunk to that level.”