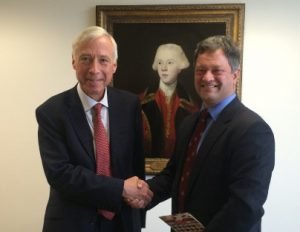 Frederick Curzon, 7th Earl Howe takes on role of Patron for the Soldiering On Awards

It is with great pleasure that the Soldiering On Awards announces its new patron as Frederick Curzon, the Right Honourable Earl Howe.  Lord Howe has long and distinguished careers in both politics and business.   Today he is Minister of State for Defence and Deputy Leader of the House of Lords.  It is an honour for the charity to have him as our patron and we welcome all that he brings to our community.

Wg Cdr Tal Lambert MBE (right) welcomes Rt Hon Earl Howe to the position of Soldiering On Awards Patron. The gentlemen stand in front of a painting of the Earl’s ancestor, George Howe, 3rd Viscount Howe, credited for the creation of the light infantry.