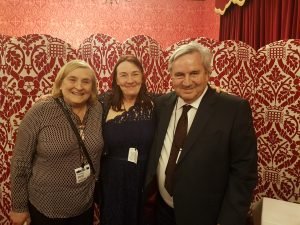 We reported recently that, since Battling ON CIC won the Soldiering On Innovation Award in 2016, the organisation has expanded enormously. (You can read about their continued successes here.)

We encourage previous Award Winners to enter the Awards again if their circumstances change or, for example, their operations benefit additional or new groups of people or they make a substantial contribution to the military family in new ways. So we were delighted that Battling On CIC were nominated again in 2018 – this time in the Family Values category.

The organisation is a fantastic example of a true family concern. Founded by Nikki Markham and operating under the banner of “Together We Can Succeed,” the whole family have supported the organisation throughout its growth. It is for this reason that the Connell Family successfully won the 2018 Soldiering On Family Values Award, sponsored by NetApp. This award was given as testament to the solidarity of three generations working together to improve the lives of so many vulnerable people.

Collecting the Award at our 2018 ceremony in April, Mr Connell Senior proudly accepted the accolade.  He described afterwards how humbled he felt to be standing there. We are honoured to be able to share with you some of his own heartfelt words, demonstrating how love and understanding can move mountains.

“It is a great honour to receive this award, which is an award which affects us all. There is no more powerful unit than the family and, in a minute, I will reflect on the nature of that power. I’ve had the chance to talk to several of you and your stories are truly inspirational. I am afraid I am nothing more than a man of shadows, a small conduit if you like, offering a pathway to better things for those that have been bruised by life.

“I, and my family, were lucky enough to inherit a small farm in Cornwall, a farm of little value commercially but a farm of great natural beauty with a salmon river, an ancient woodland and traditional flower filled meadows; meadows little seen these days, as most have been decimated by the chemical warfare we have waged against these magical pastures. But when we do see them we stop in wonder.

“My father brought the farm after the last world war. He served with the XIV Army in Burma and after the terrible sights he saw there, he to sought a place of sanctuary. He found such a place at Merryhue Farm, and he further enshrined his vision of sanctity with an unwritten understanding that there would be no hunting or shooting or the application of modern chemicals on the land. His vision was rewarded. Bruised people stop in wonder in this beautiful place. Their pathways back begin.”

Mr Connell continues with an explanation of how he was driven by actual events that affected his own parents.

“I first realised how nature can heal when an ex- soldier from the North Africa campaign, lost and bewildered after the Battle of El Alamein, walked down the lane to our farm and asked if he could spend the night in the barn, sleeping amongst the cattle on the straw. Such had been his existence for many nights, wandering around southern England in a lost bewildered way. My parents offered him the use of a cottage on the farm. They had seen what modern explosives could do to the human psyche. He stayed for the night, then another and then for a year. The magic of Merryhue had begun to work.”

This simple man, in his own way, was a giant amongst us. He never fully recovered –he had a nervous tic on the left side of his face for the rest of his days – but he turned to God and made many small wooden crucifixes which he installed in the farm buildings. My mother taught him how to paint and he spent the last days of his short life decorating the ceilings in local churches, adorning them with intricate and beautiful designs. The Green Man, the symbol of the earth’s fertility, figured largely in his paintings. He was happy.

“I think his catharsis occurred one day when we were at the river and he raised his hand and the whole river bed moved as the regiments of sea trout darted forward. “Such brave little fish,” he whispered in wonder, ‘They make heroic journeys half way across the world’s oceans to beat their lives out as they spawn in the bright gravels in pure moorland waters and then they die. They have passed on the baton of life.’

“For a moment his tortured mind had a vision of continuity. He recognised the power of the human spirit. And therein lies the secret.

Tonight I have seen the power of your minds overcoming adversity.

Tonight I have seen the power of your spirits triumph over the dark hours.

Tonight I have seen the power of love from your families defeat all enemies both within and without.

Humbly I salute you all.”

(The photo shows Nikki Markham with her parents Liz and Anthony Connell.)