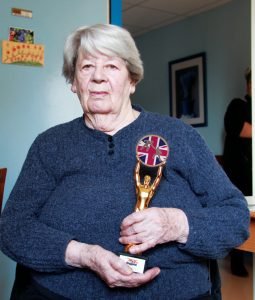 This year’s recipient of the Soldiering On International Award has been interviewed by the Sunday Express. Simone Segouin was a French Resistance fighter, and is being honoured for her bravery at this week’s award ceremony in London.

Simone Segouin, 90, risked her life many times during the secret war against the Nazi occupiers, and became famous the world over when she was pictured wielding a gun in her distinctive shorts and cap.

She helped de-rail a train and blow up bridges in and around the city of Chartres, 50 miles south of Paris and was present at the liberation of both cities in 1944, when aged only 18.

Now British military charity Soldiering On is recognising her achievements with its international award.  As Simone is now a frail 90-year-old living in a nursing home near Chartres, trustee Dennis Gimes presented her with the award there.
Simone said: “One of the best days was when we arrested 25 German soldiers towards the end of the war. It felt good as we knew we would soon have our country back from occupation.”She added: “I was not the only woman who joined the Resistance. I am proud of what we all did as a team. “But the proudest moment was probably going to Paris with General Charles de Gaulle.“It was a wonderful feeling entering the city but my excitement was limited because it felt very dangerous.”

One of Simone’s first missions was to steal a bicycle from a German soldier which, after a respray, she rode, as her reconnaissance transport.

Her MP-40 sub-machine gun was also taken from a German. Lord Richard Dannatt, former chief of the British Army, is chairman of the judging panel and wrote to Simone explaining why she was chosen.

He wrote: “The award is in recognition of your exemplary courage and devotion to the vital work carried out by the French Resistance during the Second World War.

“They were an inspiration to your fellow countrymen and women and to those of us in Britain, more than 70 years ago and they continue to be to this day, “We in Britain are still keenly aware of the vital role played by yourself and your comrades in weakening German morale prior to the Allied invasion of France, often at great personal sacrifice.

“The French Resistance and your part in it proved critical in supporting our armed forces, especially those stranded behind enemy lines.”’Allo ’Allo!’ actress Vicki Michelle, is co-hosting the awards ceremony on Friday with New Tricks star Amanda Redman and Radio 2 presenter Jeremy Vine.Vicki, who played Resistance fighter Yvette Carte-Blanche in the popular BBC series, also paid tribute to the real-life heroine in a letter.

It said: “Your story is truly one of bravery and inspiration that serves as a reminder to all of what women can be capable of when faced with such atrocious circumstances.”

When the note was read to her, Simone said: “This is very kind of this lovely lady and the charity. Merci beaucoup Britain.”

You can read the original article, and see wartime photos of Simone in action here.