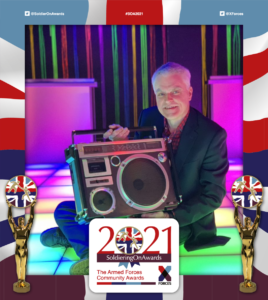 We’re thrilled to announce that TV presenter Jon Bentley is this year’s Soldiering On Awards Ambassador for the Education, Training and Development category.

Jon had always loved cars so, after leaving university, he joined the Ford Motor Company as a Graduate Trainee. A year later he was snapped up by the BBC to become a researcher for the popular show Top Gear, where he swiftly gained promotion through the ranks to become its Executive Producer. Jon is proud to have launched the TV careers of Jeremy Clarkson, Quentin Willson and Vicki Butler-Henderson, and he can boast having a corner named after him on the Top Gear test track!

​In 2002, Jon branched out from TV production to present The Gadget Show. This gave him the opportunity to indulge his passion for technology. In his youth he had repaired TVs, built radios and practised old-fashioned chemical photography – so the show was a perfect fit! Jon is now the show’s main gadget reviewer, with the 34th series of the programme currently in production.

​When not presenting, Jon enjoys writing and he published his first book, Autopia: The Future of Cars, in 2019.  He’s a prolific contributor to Classic Car Weekly, Amateur Photographer, the London Evening Standard and various magazines.

Jon is married with two bilingual daughters, and enjoys the radio, photography, architecture, business and economics, and visiting art galleries.

Jon said, “I have long been interested in how the skills acquired in one walk of life can bear fruit in another, and how necessary it is to exploit this potential as we now embrace many different careers in a lifetime. I am therefore very happy to be an ambassador for the Education, Training and Development category at this year’s Soldiering On Awards.”

You can find out more about the Education, Training and Development Award and see some of its previous winners here.