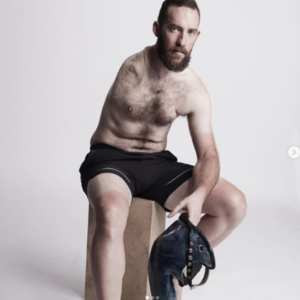 This year’s Mental Health Awareness Week focuses on the concept of positive body image, so who better to explain its importance than Dan Richards, Inspiration Finalist in the 2019 Soldiering On Awards, and host of Channel 4’s Naked Beach.

In 2009, Dan was serving in the Royal Artillery when he was involved in a horrific motorbike accident whilst off duty. He had a snapped collar bone, severed brachial plexus, and numerous fractures to his left arm and ankles. After hours of surgery, his right arm and shoulder were removed.

Dan was very self-conscious of his injury, To overcome negative feelings, he focused on things he liked about himself in order to change his mind-set. With this positivity came new-found confidence. Dan wanted to inspire and share this confidence with others, so decided to become a model.

Eager to showcase that bodies come in all shapes and sizes, he signed up with agencies, where he is challenging everyday beauty standards. He has previously appeared in Channel 4’s #GetTheInsideOut mental health campaign and, last year, appeared in his first choreographed catwalk and fashion show during London fashion week.

In the ten years since Dan was injured, he has grown massively in confidence. He is eager to help other people overcome their own body issues, whether or not they were injured or have disabilities. He is challenging images of the ‘perfect’ body via his social media, including his YouTube channel, and spreading positive messages by doing so.

Dan says, “When it comes to a positive body image, you have to be able to accept it first and foremost for what it is: yours.

“Stop comparing your body to everybody else’s; you’re not them – and don’t listen to those feeding you a narrative that, as a man or woman, you should be a compiled list of things.

“Comparing ourselves to other people, or to an idea of what men or women want in a partner, is a debilitating, unhappy way to live. We have these images of masculinity and femininity thrown in our faces, and the stigma doesn’t help either.

“The reality is this: if you want a beach body, buy some shorts and go to the beach… You now have a beach body! Whatever you do with your body, whether losing weight, gaining weight, building muscle or even growing a beard, do it because you want to and not for validation or to impress somebody. But, if you feel you must impress somebody, why don’t you try to impress yourself?!”

To find out how Dan and his colleagues help people to overcome negative body image issues (in a rather extreme way!), you can see him in action in Naked Beach (not for the faint-hearted)!