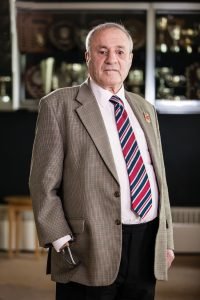 Presented at the discretion of the charity’s trustees to recognize a person whose efforts have had a significant impact on the UK’s Armed Forces Community.

Awarded to Ray Hazan, a blind veteran who epitomizes the courage, commitment and resourcefulness of Blind Veterans UK, first as a client, then as a staff member and now as an ambassador and president.