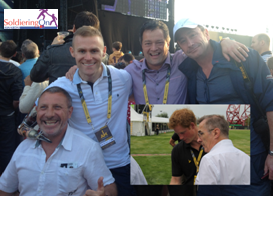 The Soldiering On Through Life Trust will be highlighted at the upcoming Invictus Games to be held 10 – 13 September at the Queen Elizabeth Olympic Park in London.  More than 400 wounded, injured and sick servicemen and women, from 14 nations, will compete at this international sporting event championed by Prince Harry.

The Invictus Games are being organised with the support and backing of The Royal Foundation of The Duke and Duchess of Cambridge and Prince Harry, as well as the Ministry of Defence.  Teams from Afghanistan, Australia, Canada, Denmark, Estonia, France, Germany, Georgia, Iraq, Italy, Netherlands, New Zealand, United Kingdom and the United States are expected to take part. www.invictusgames.org

“The Soldiering On Through Life Trust will be one of 10 UK charities with focus on the Armed Forces Community to be highlighted during the games via video as well as our presence during the opening and closing ceremonies,” said Soldiering On Chairman Wing Commander Tal Lambert MBE.

Volunteers for Soldiering On Through Life Trust will be available at both opening and closing ceremonies to talk about the charity, its goals and aspirations.  Members of the public will have the opportunity to meet a few of the Invictus Games participants at the Soldiering On display in Queen Elizabeth Park.