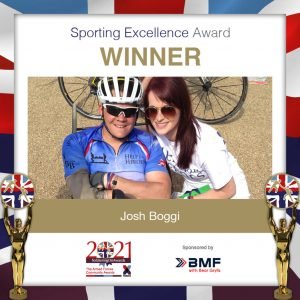 Sponsored by Be Military Fit with Bear Grylls

An award to honour a person that has overcome challenges in pursuit of sporting excellence, demonstrating outstanding achievement in the field of sport and contributing to the endeavours and advancement of the Armed Forces Community. The winner of this award will be chosen through a public vote.

A triple amputee, Josh completed the Race Across America in a record time, has won several medals at the Invictus Games and is a qualified PADI rescue diver as well as coaching his son’s football team. 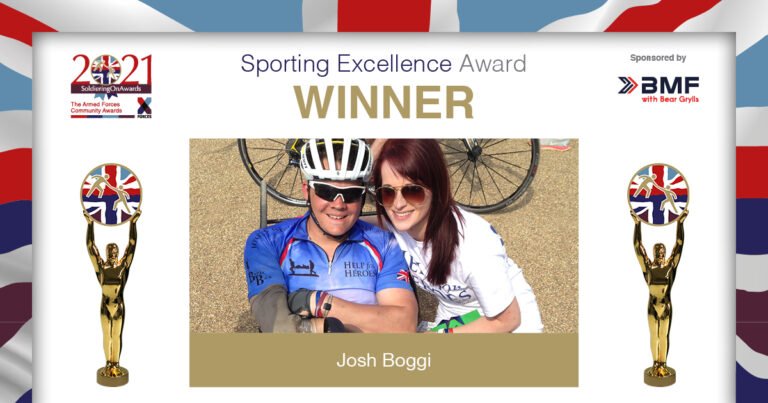 Josh Boggi sustained horrific injuries in 2010 while on tour in Afghanistan, resulting in the loss of three limbs. Nine years later, a near fatal road accident led to further amputation of part of his remaining stump. Josh contracted sepsis and was left fighting for his life. He spent 10 weeks in hospital, underwent 12 surgeries and 21 blood transfusions, and has only recently started to walk again. Josh overcame these huge obstacles and never let them get him down. He doesn’t let his injuries define him, and most definitely does not let them stop him from trying anything.
A keen sportsperson, Josh completed the Race Across America in a record time of 6 days, 12 hours and 36 minutes. He took part in the Invictus Games in 2014 and 2016, proudly picking up several medals. Proficient on land and in the sea, Josh is a qualified PADI rescue diver; he fancied trying scuba diving while on his honeymoon and very quickly became addicted. Training with Deptherapy, he becomes the world’s first triple amputee rescue diver! Anna Boggi said:

“Josh doesn’t really understand the words ‘no’ or ‘I can’t’, which is why he’s done so many incredible challenges or events. When he said he was cycling across America I thought he was bonkers, but he did it, then he said he was going to become a scuba diver – a rescue diver – he just cracks on and does it!”