We are delighted to announce that Vicki Michelle MBE is this year’s Soldiering On Awards Ambassador for the Family Values category.

Famed worldwide as waitress Yvette in the BAFTA nominated and award-winning series Allo Allo and The Return of Allo Allo, Vicki enjoys an extensive career in television, theatre and film.

With a theatre and filmography covering many diverse roles, she has starred alongside actors including Ray Winstone, Danny Dyer, Idris Elba and Hugh Bonneville. No stranger to reality TV, Vicki’s credits include I’m A Celebrity Get Me Out of Here, Celebrity Masterchef and Big Brother’s Bit On The Side. Vicki is equally in demand to appear on Britain’s favourite game shows and she hosts her own weekly radio show, Vix Mix, on Phoenix 98fm in Essex.

A committed charity worker, Vicki was awarded an MBE in The Queen’s Birthday Honours List 2010 for Services to Charity and made a Dame of the Sovereign Hospitaller Order of St John of Jerusalem Knights of Malta in 2012.

As well as being a long-standing Ambassador for Soldiering On Awards, her other charitable roles include President of The Lady Taverner’s Eastern Region, member of the Royal Variety Charity Executive Committee, Lady Ratling, SSAFA Southend, Keep Britain Tidy, Homeless Worldwide, and Wetnose Animal Aid – in addition to being a Patron of Essex-based charities: Haven House Children’s Hospice, The Dream Factory, AA Dog Rescue and the Essex Women’s Advisory Group.

She produced, co-wrote and presented Aspergers – A Helping Hand DVD, a self-help resource for young people with Asperger’s Syndrome which received great acclaim nationwide, and was the longest serving President of The Heritage Foundation, London, following the late Robin Gibb CBE and during which time The Foundation was instrumental in bringing the building of the Bomber Command Memorial in London’s Green Park to fruition. It was ultimately unveiled by Her Majesty The Queen in her Diamond Jubilee year.

An astute business woman, when not performing or supporting her chosen charities, Vicki can be found working in the family business she founded almost 30 years ago, the after-dinner speaker agency Trading Faces.

You can find out more about the Family Values Award and see some of its previous winners here. 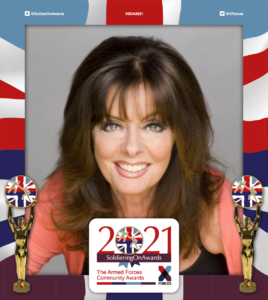