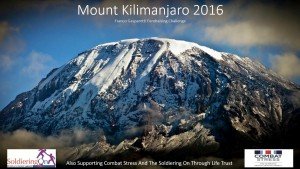 Soldiering On Award winner Franco Gasparotti is preparing for a gruelling expedition to Kilimanjaro, scheduled to depart on September 30 2016.  This challenge is raising money for his final corrective surgery post recovery, Soldiering On and Combat Stress (who helped on this road to recovery). Franco is currently also seeking two extra people to join his team. 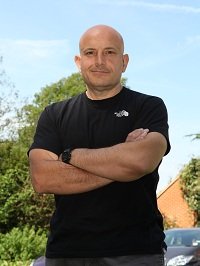 Franco is a former Soldier in the Coldstream Guards, now working as a health and fitness consultant as well as being an ambassador for Combat Stress and Soldiering On – two charities that are very close to his heart.  He was the recipient of the 2014 Soldiering On Against All Odds Award for overcoming adversity following a serious injury sustained during operational service and left the Army on medical grounds.  He later developed Post Traumatic Stress Disorder and almost died of heart failure, but managed to turn his health and his life around. He is still undergoing treatment and his main reason for this challenging expedition is to raise the money he needs to regain full health.  You can read more about Franco on his website and social media sites – the links are below.

Franco has formed a team of 15 men and women, with nine being former members of the Coldstream Guards and people he served with.  They will be supported throughout by Action Challenge https://www.kilimanjarochallenge.com/, their expedition hosts, who are very experienced operators in leading expeditions world-wide including Mount Everest and Mount Kilimanjaro.

The team will also be supported by highly qualified mountain guides, porters and team medics, and covered by the most comprehensive insurance and logistical support available on Kilimanjaro. They are further supported by Trek Hire UK https://www.trekhireuk.com/ led by Mick Cain, a former Coldstream Guardsman and expert Mountaineer and Trekking guide, along with Kuta Outdoors https://www.kutaoutdoors.co.uk/  which is led by another former Coldstream Guardsman and expert Mountain Leader, Phil Lee, whose companies are providing training days and weekend camps along with equipment hire for the expedition.

Together they are preparing for the challenge that lies ahead in their efforts to successfully summit the highest free standing mountain on earth – 5895m!  As the expedition leader and a qualified personal fitness trainer, Franco has put together a comprehensive fitness training programme to prepare the team for this event.

Franco and the team are working hard to raise as much sponsorship as possible towards their fundraising target of £25,000. Each member of the expedition team will raise money through sponsorship whilst the kind and generous donations made through members of the public will help fund medical attention that Franco requires to enable him to regain full health.   All funds raised above the amounts required to pay for his surgical procedures and aftercare will be equally divided and shared between Combat Stress and Soldiering On to assist both charitable organisations with their ongoing work caring for British Military Veterans.

Facebook: Franco Gasparotti – Motivational Speaker / Ambassador: this is a join as a member page

Facebook Page / Franco Gasparotti – Kilimanjaro Challenge 2016: which people can apply to join as a supporter / sponsor of the expedition as it’s a members only page for security reasons. If you click the join button he will add you to the group

The Lament of Frank Airey, Franco’s name used whilst serving until he reverted back to his family surname of Gasparotti when he left the army. His good friend and former Scots Guardsman Stephen Pettigrew, now singer songwriter, wrote and performed this song and has produced a video and single which can be purchased on Amazon music in support of Franco’s fundraising.  You can also view it on YouTube:  https://m.youtube.com/watch?feature=youtu.be&v=ztuS1w1j6Ac

If you’re interested in joining the expedition or for more information, please email: info@francogasparotti.co.uk