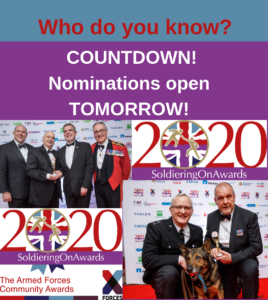 Only one more day to go until nominations open for the 2020 Soldiering On Awards! Have you got your thinking cap on to decide who you’re going to nominate?

Remember that it could even be you!

There are several Award categories, so you’re bound to know at least one person that deserves recognition.

Today let’s catch up with our Animal Partnership and FIMT Working Together Award Winners.

Our 2019 Winner of the Animal Partnership Award was Bravehound.

This Award was decided by a public vote.

Bravehound dogs provide a life-long companionship to their owners, enabling veterans with post-traumatic stress disorder to lead a normal life. The dogs give their human partners confidence to break social isolation and engage with the world again, helping them to deal with flashbacks and provide a vital role in suicide prevention.

On being awarded the Animal Partnership Award in the Soldiering on Awards, Fiona MacDonald Founder and CEO told us, “We were so delight to be voted the best Animal Partnership award; it’s a fantastic achievement for all of our amazing dogs and the Veterans we are so proud to support at BRAVEHOUND. The role that dogs can play in the lives of Veterans living with Post Traumatic Stress Disorder and other mental health conditions is life changing, and life saving – and along with the other finalists in the Animal Partnership category, it’s a wonderful opportunity to get that message across. We’re very much looking forward to working with the Soldiering On Awards team over the coming year on the 3:6:12 programme and really excited about the future of BRAVEHOUND.” 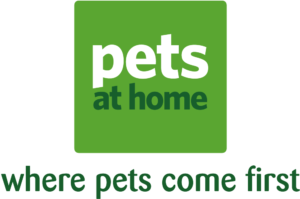 This award was generously sponsored by Pets at Home. Sarah Woodward, Business Development Manager at Pets at Home said, “We understand how important and influential a pet can be on an owner’s life as a valued member of the family. Pets at Home is proud to sponsorship the Animal Partnership Category in testimony to the positive impact pets have had on the lives of their exceptional owners and wider veteran community who they have helped.”

Our 2019 Winner of the FIMT Working Together Award was Unforgotten Forces.

Unforgotten Forces was formed when Poppyscotland sought to build a partnership of like-minded organisations to look after the 280,000 older Veterans living in Scotland. Bringing together 15 diverse charities, the consortium helps to tackle issues such as healthcare, transport, social isolation and creativity, as well as assisting people living in care settings. Unforgotten Forces is funded by a £4million award from HM Treasury via the Aged Veterans Fund.

Gary Gray of Poppyscotland has told us, “We were delighted to receive the 2019 Soldiering On Working Together Award.  Receiving this award was excellent recognition for the outstanding work that is being carried out by the Unforgotten Forces consortium in support of older veterans across Scotland.  The awards evening was a special occasion and we felt very privileged to be amongst so many inspirational people.  We are hopeful that the award will allow us to build on the strong foundations that Unforgotten Forces has put in place to support so many deserving members of the Armed Forces community in Scotland.”

This award was generously sponsored by The Forces in Mind Trust. Ray Lock, its Chief Executive said: “Forces in Mind Trust is delighted to recognise the outstanding collaboration shown by all our finalists.  The efforts of Unforgotten Forces and Poppyscotland are particularly noteworthy, and offer a shining example that all of us in the military charities sector would do well to follow.”

It will be fantastic if you can help to spread the word by sharing this blog to make sure as many people as possible have the opportunity to nominate whoever they feel deserves an Award!  These tags may help you: #SOA2019 #SOA2020 #soldieringonawards @glen_art @K9Finn @FiMTrust @DefencePeople @poppyscotland @SSAFA