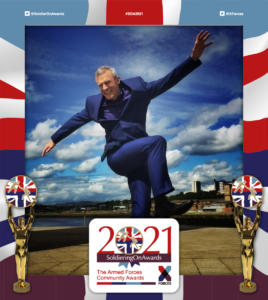 We are thrilled to announce that Jeremy Vine is this year’s Soldiering On Awards Ambassador for the Inspiration category.

One of Britain’s most prolific TV and radio personalities, Jeremy Vine has presented a plethora of topical and political shows, such as Panorama, Newsnight, Crimewatch and BBC1’s Points of View. He’s hosted the graphics for BBC election specials, including nine extraordinary all-nighters: Trump, Brexit and several unpredictable general elections.

Jeremy currently hosts Eggheads, a teatime staple which ranks as one of the longest-running quiz shows in British TV history, as well as his weekday TV show on Channel 5, simply called Jeremy Vine. In addition he hosts The Jeremy Vine Show on BBC Radio 2.

A highly revered presenter, Jeremy was named Speech Broadcaster of the Year at the Sony Awards in 2005 and 2011 and won Interview of the Year for the famous “head-in-hands” moment with Prime Minister Gordon Brown during the 2010 election.

On a more light-hearted – and light-footed – note, in 2015 Jeremy donned his dancing shoes for Strictly Come Dancing, where he was described by judge Craig Revel-Horwood as “a stork struck by lightning!”

A reviewer in the Telegraph of his best-selling autobiography, ‘It’s All News to Me’, wrote:

You can find out more about the Inspiration Award and see some of its previous winners here.