An award to honour a person that has overcome significant challenges, injury or disability, and whose ongoing or past outstanding achievements are an inspiration to others within the Armed Forces Community. The winner of this award will be chosen through a public vote. 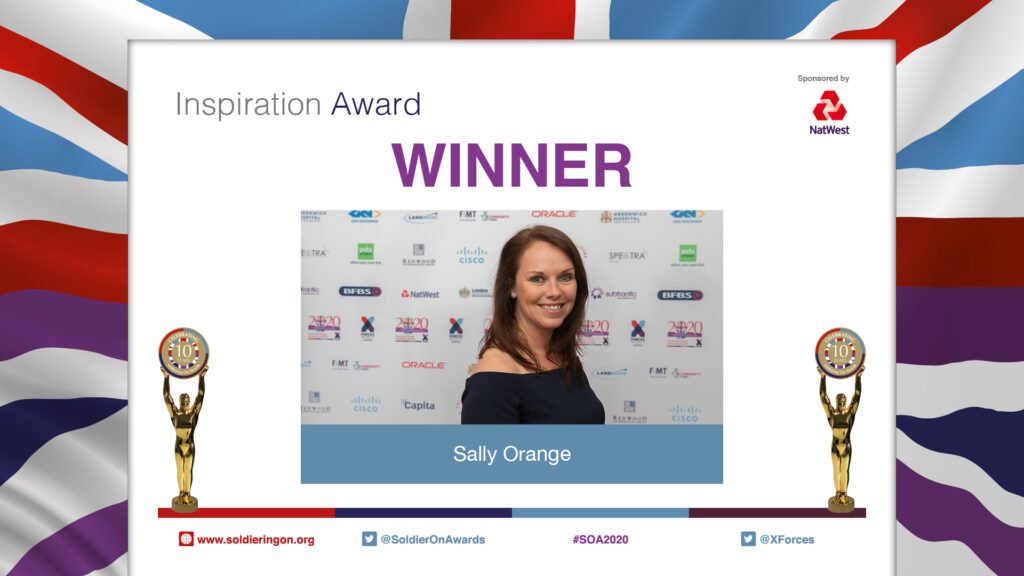 Although battling daily with her own mental illness, Sally Orange has made it her crusade to raise awareness, funds and support for her colleagues through sport and physical challenges.  She has completed 46 marathons dressed as different pieces of fruit, including 150 miles across the Sahara and a 100 mile run across a frozen lake in Mongolia. In addition, she has swum the English Channel and cycled the length of New Zealand.

Sally champions and encourages women and people with invisible illnesses to achieve greater self-belief through participation. An Invictus Games medallist and 7 x World Record holder, she was the founder of the first all-female wounded, injured and sick team to complete the 3,070 mile Race Across America, the world’s toughest cycle race.  The team completed the race in 8 days and 12 minutes – a first in the event’s 38 year history. Sally’s commitment to seeking £100,000 sponsorship was phenomenal, and her team won the ‘Spirit of RAAM Award’ for exceptional teamwork and sportsmanship.

“It is difficult to think of anyone who has given so much, across so many spheres, in support of the wounded, injured and sick members of our armed forces.”

On top of these remarkable sporting achievements, Sally has given 21 years’ service to the Army Reserve and was deployed to Afghanistan. She has inspired many patients through her work as a military physiotherapist treating wounded and injured Army Reservists returning from Iraq and Afghanistan. In addition, Sally mentors, educates and inspires a wide and eclectic audience, and she has raised £30,000 in support of numerous military charities.

“It is impossible to deny that Maj Orange is anything other than an inspiration.”