An award to honour a person whose lifetime of dedicated service has provided a significant contribution in support of the Armed Forces Community. 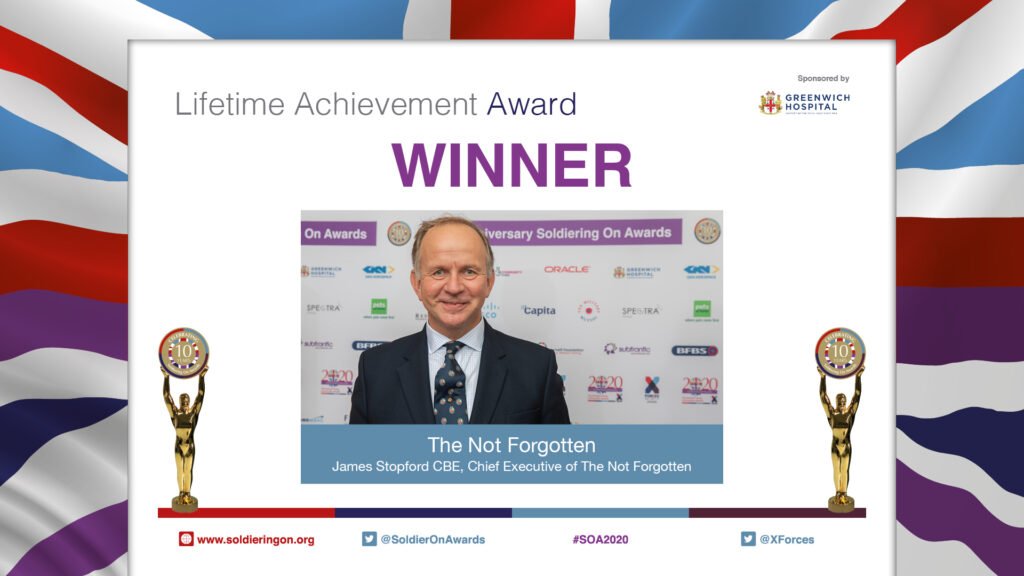 The Not Forgotten has served the military community for 100 years. In 1919 their founder, Marta Cunningham, witnessed hundreds of men languishing on the wards, suffering from wounds sustained in The Great War. She set up The Not Forgotten and in the first year entertained around 10,000 individuals. The organisation remains true to its original ideals, providing activities that alleviate suffering and directly address the causes of isolation and loneliness amongst vulnerable members of the Armed Forces family.

In 2018/19 they supported 10,471 people from all Services, from WWII Veterans to those still serving. The oldest beneficiary was 106 years old, and youngest – a currently serving 23 year old.  The Not Forgotten is a partner to every military charity, association and organisation; they support them all. With no membership, they help any serving member or Veteran who is ill or suffering regardless of service, age, rank, length of service or type of illness.

“The Not Forgotten has supported, motivated and inspired around one million beneficiaries since 1919.”

With benefits including concerts, outings, respite holidays, TVs and TV Licences, The Not Forgotten has something for everyone, but particularly those who need and would benefit from a challenge. Since 1921 they have also hosted two annual Royal events, a Garden Party and Christmas Party for 3,000 individuals.

This charity epitomises the very best of the Armed Forces and those who serve our community. Its focus is relentlessly on the beneficiary, and they achieve a considerable amount by working closely with others, being the trusted partner of choice for delivering specific events, and constantly doing more and doing it better.  The Not Forgotten’s programme creates the all-important environment where service personnel feel secure and relaxed, where banter and camaraderie come to the fore, morale grows and confidence is regained. These are the building blocks upon which all recovery is based; feeling valued and included, and having dignity and independence restored are often the first steps to normality.

“The Not Forgotten is the military charity sector’s unsung hero; they make a difference without the noise.”

“Even though it’s a small charity, it’s a mighty charity in my eyes, it has done so much for so many people. They entertain 10,000 people every year from a 23 year old to a 103 year old which is fantastic. They never stop, even though they still entertain thousands of veterans and serving personnel, and through the difficult times, they have been doing outside concerts for nursing homes and things like that. I can’t praise the Not Forgotten enough, the cherry on the cake is that they have been going for 100 years, this year, which is even more fantastic.”