An award to honour the unique relationships and companionship provided by animals, and/or the achievements of individuals or organisations engaged with animals that support and empower members of the Armed Forces Community.  The winner of this award will be chosen through a public vote.

This award is suitable for a person, team or animal companion. 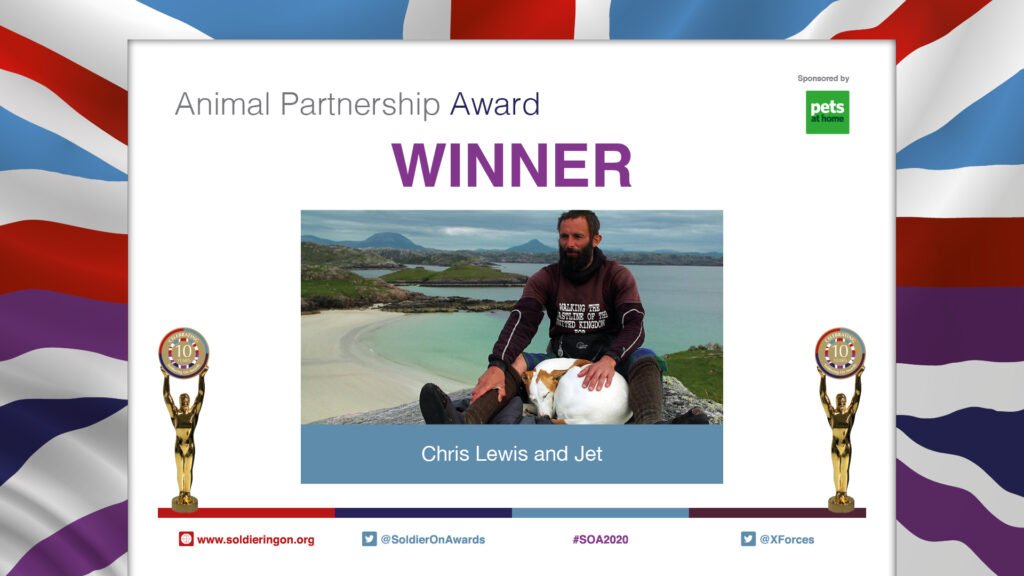 After leaving the Parachute Regiment, Chris Lewis spent ten years raising his daughter as a single parent. Life was not easy and, at crisis point, Chris faced debt, homelessness and the fear of his family being separated. He became very secluded but received invaluable support from ABF The Soldiers Charity, The Airborne Forces Security Fund and SSAFA’s “Last Resort” Fund.

When his daughter went off to college Chris vowed to give something back. Aiming to raise £100,000 for SSAFA, he set off from Swansea in August 2017 to walk right around the United Kingdom. The following January he met Jet, a poorly looked after working dog, and the two have been inseparable ever since.

Chris and Jet forged an empathic bond and, as walking partners, they have covered many thousands of miles together, showing fantastic teamwork. They have turned from being isolated and inward looking to always looking forward, and their story offers hope to others who face struggles and withdraw from life.

Chris says, “I was a little bit broken and she was too.” They face challenges together: “the hard parts are the most beautiful.” In the summer heat of August 2018 Chris had to carry Jet across the Isle of Skye.”

Together for nearly two years, the pair have so far raised £79,000 for SSAFA. They have earned the respect of peers worldwide, with almost 30,000 followers on Facebook. Their social media posts show the incredible beauty of the UK’s landscape, our precious wildlife and its amazing people. They have also raised awareness of the sacrifices made by our Armed Forces, in both war and peacetime, by showing the many memorials along our coastline. A 2019 calendar of their walk photos added to their fundraising.

But over and above this fundraising, their walk has illustrated far more about the Armed Forces family; the kindness and support from others has been outstanding. Chris and Jet have reciprocated by visiting schools and Veterans’ breakfast clubs to talk about their journey. They are both becoming inspirational teachers.

“Chris and Jet are the embodiment of Soldiering On. Their achievement in walking the coastline together for almost two years shows commitment, tenacity, courage, and physical and mental skill.”