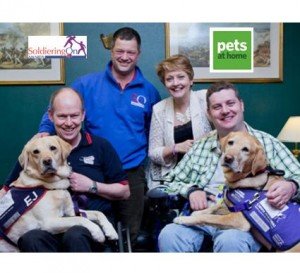 The Soldiering on Trust were lucky to have been invited to attend the prestigious  ‘Pets At Home’ Supplier Awards at the Imperial War Museum in Manchester.  The Charity was represented by Wing Commander Tal Lamber and fellow trustees Murray Harkin and Sunday Mirror’s Mike Hamilton.

In an moving speech ‘Canine Award’ nominee Steve Brookes (accompanied by his Canine companion ‘Kizzie’) told a packed audience about life after injury and how his support dog ‘Kizzie’ has helped to give him is life back.

This year the ‘Canine Award’ is being sponsored for the first time by the leading retailer ‘Pets & Home’.

Over a £1000 was raised on the night for the Charity by guests digging deep to support their major fundraising vehicle the 2013 Grand Raffle.

There are a few days left to vote for the ‘Caine Award’ – please do as all monies received through the voting lines will go to the Charity.   More details on nominees for the ‘CANINE AWARD’ can be found HERE