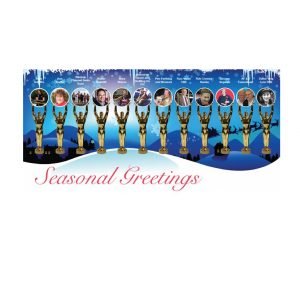 Welcome to the 2016 Soldiering On Awards update.

With a festive reminder of our amazing 2016 Awards-winners featured in our Seasons Greetings card to you! 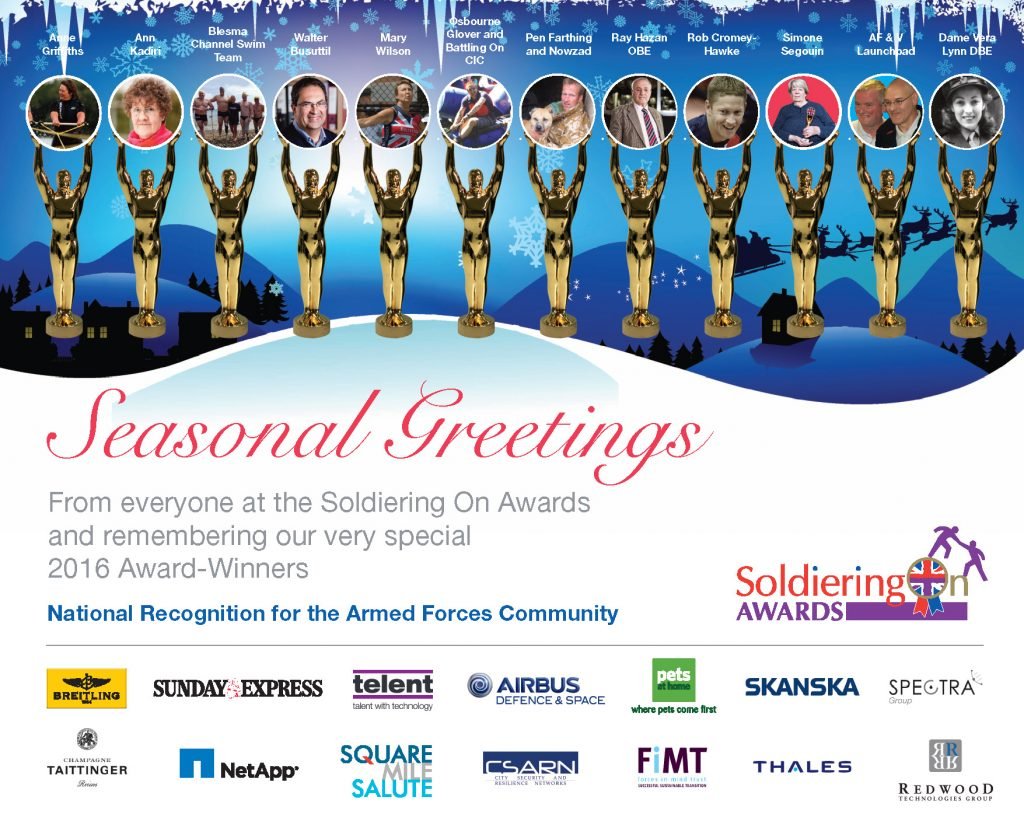 During this busy time of year, many of us will be looking forward to celebrating Christmas with our family and friends. It’s also a time of reflection of the past year and we at Soldiering On have much to be grateful for.

From every member of the public who has taken the trouble to nominate someone for an Award and each and every nominee whose achievements are an inspiration to us all; for the time and dedication of our Independent Judging Panel, and the support of our incredible sponsors, without whose support none of this would be possible.

On Friday, 24 March 2017, for the 7th year in a row we will once again recognise an amazing group of Finalists and Award winners who have been an inspiration to others. As Chairman, it is my pleasure to thank my fellow trustees and team; without their dedication and hard work, the Soldiering On Awards would not exist to recognise the achievements of members of the Armed Forces Community and those who support it.

Most of all I would like to thank you for your continued support and for making the Soldiering On Awards possible. The Awards is a reflection of the dedication of those who believe in the covenant we have with our Armed Forces Community and I, for one, am truly grateful.

It is with much gratitude that we thank our Independent Judging Panel co-chaired by General the Lord Dannatt and Debra Allcock Tyler, Chief Executive of Directory of Social Change (more details here).

The Trustees are delighted to announce that actress Vicki Michelle MBE is now an official Soldiering On Awards Ambassador (more details here).

Thank you for fundraising for Soldiering On

The Soldiering On Awards and its recipients have benefited from some remarkable contributions from people wanting to support our Armed Forces Community.  We would like to thank the following for their wonderful efforts:

CSARN Salute – Square Mile Salute joined forces with the City Security and Resilience Network (CSARN) for a stunning black tie fundraising night of fun and laughter, the CSARN Salute, raising funds to benefit three military charities including the Soldiering On Awards.  An amazing evening was had by all. (more details here)

Great North Run – Six runners took part in the Great North Run this past September in aid of Soldiering On.  The 13.1-mile route began in Newcastle-upon-Tyne and ended in South Shields.  Johnny, Bretten, Michelle, Ben, Helen and Mark trained extremely hard for this amazing run. We thank them for helping to promote Soldiering On and for their support of our Armed Forces Community.

Kilimanjaro Climb – Congratulations to the team who climbed Kilimanjaro in October, enduring 6 days of high altitude and exhaustive climbing. It was a fantastic achievement from the 17 team members in support of Franco Gasparotti (Soldiering On Award Winner 2014).  Soldiering On Awards Chairman Tal Lambert and his wife Yve joined the group as they raised money to support Franco for his final operation on his road to recovery from PTSD. Click here to read more about Franco’s journey.

2017 Hotties Calendar Launch – thank you goes to Eneshia and the 2017 Hotties Calendar Girls who are all connected to the Armed Forces Community who once again launched an annual calendar to raise funds for the Armed Forces Community and Soldiering On were delighted to be a beneficiary. Special thanks also goes to Peter Stringfellow of Stringfellows in Covent Garden, London, for sponsoring the event.  Calendars are available on eBay by clicking here.