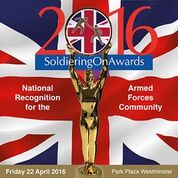 See all the incredible winners stories who were recognised at this years Soldiering On Awards.

In recognition of the achievements and special companionship and support provided by a canine partner.

Pen named this charity after the dog he adopted while on duty in the war-torn town in Afghanistan. The NOWZAD charity has reunited over 800 soldiers with the pets they adopted while serving in war zones around the world. [more…]

In recognition of an individual or family whose selfless dedication and support for others in ensuring they are cared for is a shining example of family values.

Ann founded the Rushden Branch Friendship and Companionship Group to provide veterans and members of the Armed Forces Community, who may be living a lonely existence, with a kind word and smile; their group has created a community of hope and support through open arms [more …]

In recognition of an individual or organisation that has demonstrated innovation in their approach to providing solutions for challenges faced by Service men and women and their families and the Armed Forces Community as a whole.

Battling On CIC trains veterans to become mentors/instructors to young people who have disengaged with education and become involved with crime. [more …]

In recognition of an individual who, in spite of major personal challenges, injuries or disability, has set an inspiring example to others through embodying the spirit of Soldiering On.

After losing both his legs in Afghanistan, Clive has become a major supporter of a wide variety of military charities as well as a leader in the community. Overcoming his own challenges Clive dedicates much time to others and is an outstanding ambassador for his community. [more …]

The PEOPLE’S CHOICE AWARD
with media partner The Sunday Express

A group of Awards Finalists whose stories were shared with the public through our media partner the Sunday Express; raised awareness of the amazing achievements of our Service men, women and the charities and community that support them. The winner was:

After 18 months of training, this four man team became the first ever all-amputee team to swim across the English Channel in just over 12 hours. [more …]

To recognise an individual, team or organisation that has demonstrated an enduring commitment and innovative approach to collaboration within the sector.

To recognise an individual, team or organisation that has demonstrated an enduring commitment and innovative approach to collaboration within the sector.

Despite a life-changing brain injury in Afghanistan, Rob has overcome his challenges to excel in sport, competing in the 2015 Warrior Games, leading him to help found Headway Forces Support Group, the first of its kind. [more …]

In recognition of an individual or organisation that has given exceptional training and provided support in helping others overcome life-changing injuries or circumstances.

For over 20 years, Anne has volunteered as an adaptive waterski instructor having taught over 500 wounded, injured and sick military personnel with a range of physical and psychological injuries to waterski. [more …]

In recognition of an individual or group who have overcome their disability or injury to excel in the field of sport.

Her injuries in 1994 and 2009 led to her medical discharge and affected her ability to play sport.  Despite this, she trained hard and was selected for the Warrior Games as well as being selected Field Team Captain of the Invictus Games, winning five medals,  all the while suffering from Multiple Sclerosis. [more …]

In recognition of an individual or group whose lifetime of dedicated service has provided a significant contribution in support of the Armed Forces Community.

For over 34 years Walter has striven to support the military community to overcome mental illness, creating one of the most effective treatments of military Post Traumatic Stress Disorder in the world.

The award was presented by actress Amanda Redman, patron of the 2015 Lifetime Achievement Award winners, The Guinea Pig Club. [more …]

Presented at the discretion of the charity’s trustees to recognize a person whose efforts have had a significant impact on the UK’s Armed Forces Community.

Ray is a blind veteran who epitomises the courage, commitment and resourcefulness of Blind Veterans UK, first as a client, then as a staff member and now as an ambassador and president.  The award was presented by celebrity chef Monica Galleti who is a patron of the Royal London Society for Blind People. [more …]

Recognising an individual or organisation whose achievements are considered remarkable and significant both to the Armed Forces Community and the wider community.
Dame Vera Lynn

Dame Vera continues to be widely known as the “Forces’ Sweetheart.” She was the voice of home to thousands of men and women serving overseas during World War II. BBC Radio 2 presenter Jeremy Vine is presenting her with the award. [more …]

Please nominate someone you know for a 2017 Soldiering On Award!